Question Time and the BNP

The news that Question Time is likely to invite the BNP's Nick Griffin to be a panellist at some stage has set off a keen debate in the newspapers and among politicians. Of course, Mr Griffin has been on many other BBC programmes, including the Andrew Marr Show during the summer - so why is an appearance on Question Time front-page news? 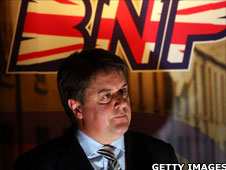 It's true there is something different. For a start, panellists, whether they are party politicians or not, are being given a platform to share their views with the audience on a broad range of subjects. That's not quite the same as, say, an interview on Today or Newsnight, where an interviewer pursues a particular line of questioning, usually on a specific issue.

But that is not to say that politicians, when they appear on Question Time, or other debating programmes such as Any Questions on Radio 4, are not being subjected to the tough level of scrutiny which is central to BBC journalism. Ask any cabinet minister - a Conservative in the mid-90s, one from Labour more recently - and they'll tell you that it's often there, with an engaged and passionate audience, where you find out just how well thought through are your policies and views.

Sitting on a panel is also different because it usually involves more interaction with other politicians - and this is where the newspaper stories are particularly interesting. It's said that Labour is reviewing its stance of not sharing a platform with the BNP. All the other parties are having to come to terms with the fact that the BNP won two seats in the recent European election, giving them representation at a national level for the first time.

For the BBC, it's quite straightforward. "Due impartiality" means we have to take account of the political context when we're making editorial judgements, day in day out. There isn't one single formula which applies in all circumstances. So how do we decide what are appropriate levels of airtime for the different political parties? Our starting point for that judgement - though not the only factor - is how real people vote in real elections.

Measuring impartiality is less about mathematics and more about good judgement - but let's just look at the maths for a moment. In the recent European election, the BNP won more than 6% of the vote across Britain - approaching a million people. In some regions it was close to 10%. Like the Greens, they now have two MEPs - far fewer than UKIP - but they also have over 50 local councillors - fewer than the Greens, many more than UKIP.

Ever since UKIP and the Greens won representation at a national level, they have appeared from time to time on Question Time. Inviting the BNP onto the panel would be a continuation of the approach which recognises that the level of electoral support is a relevant factor in making these judgements.

The BBC could not apply different standards to different parties because of their particular policies. That would be a breach of our charter, challengeable in the courts.

But it's not fear of the lawyers or lobbying from the BNP themselves which would prompt an invitation to Nick Griffin. Impartiality is at the core of the BBC's journalism and this is a normal part of the process of constantly asking ourselves how we should be defining that impartiality in a changing political environment.

Ric Bailey is the BBC's chief political adviser and was executive editor of Question Time from 2000 to 2006.