Long before satellite technology made it routine, he took BBC audiences to far away places, and explained the biggest stories of our times - first on radio, then television.

He was comfortable and composed in the most dangerous places - covering wars across five decades, from Aden in 1967 to Iraq in 2003. 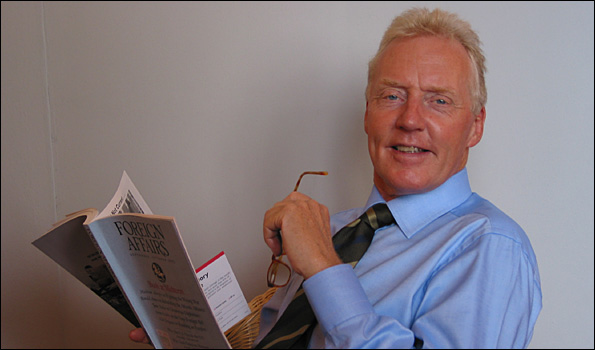 Brian joined the BBC External Service - the World Service - as a producer in 1965. He had made his name in newspapers in the West of England.

Two years later, he became the BBC's Aden correspondent, reporting the end of over 130 years of imperial control.

Of the half-dozen or so end-of-empire sagas that he witnessed, he later described it as the saddest, and most abject.

After Aden came Cairo, and then his appointment as South East Asia correspondent, where he would make his name, reporting nightly on the twists and turns of the Vietnam War.

In 1975, he watched with his friend and long-time cameraman, Eric Thirer as the last helicopter left the roof of the US Embassy in Saigon and was there as the North Vietnamese claimed victory - ignoring the BBC's order to leave.

Brian delighted in telling the story of how he'd known the end was near when plaster began falling off the ceiling of the broadcasting studio at Saigon Radio.

Brian had gone there to talk to London because there were no reliable phone lines. As the building shook, the microphone suspended from the ceiling swung above his head - a renegade squadron of strike planes, which had defected to the communist North, was bombing the presidential palace just up the road.

It was at that moment that the BBC Governors in London decided he should evacuate - the order to board the nearest helicopter crackled through the earphones in the dust-filled studio. He ignored the instruction - as Brian put it "what foreign correspondent would walk away from his biggest story yet?"

Other big stories were to follow. In the seventies, he reported from Africa on the fall of Idi Amin in Uganda - later scooping the world, by tracking down the former dictator to a secret hideout in Saudi Arabia.

He saw the overthrow of Emperor Bokassa in the Central African Republic and covered the end of the war in Rhodesia. For a brief time, he returned to the UK and worked in Belfast as Ireland correspondent at the height of the Troubles. But he was soon back where he felt most at home - on the road, as a foreign correspondent. In the eighties, he covered the Falklands War from Chile, and then helped lead the BBC's coverage of the first Gulf War in 1991.

More than a decade later - even after his official retirement from the BBC - he went back for the Iraq War of 2003, based in the Gulf. It was Brian, who, on the opening night of the war, reported from the deck of the USS Mobile on the first missile fired by US Forces against Saddam Hussein.

Brian Barron served as the BBC's man in some of the world's greatest cities - Cairo, Hong Kong, Washington, New York, and Rome. Along the way, he was the RTS Reporter of the Year and won the International Reporting Prize for his coverage of Latin America.

In 2000, Brian retired to New York, the place that had become his home but he remained as hungry for the story as ever. Two years ago, in what would be his final report for the BBC, Brian returned to Aden, 40 years after Britain's ignominious retreat.

He told the story of how he had watched as the Union Flag was lowered, as a British Military Band played "Things Ain't What They Used to Be". It was vintage Brian - funny, poignant, but with a message.

Brian was part of the greatest generation of BBC reporters and cameramen - a brave bunch who roamed the world and covered the most important stories of the time. Not for them the ease of satellite or digital technology - instead, they'd wait hours, sometimes days, to even place a phone call. But the story still got through.

Brian Barron was among the greatest of that great generation. He died this morning aged 69 - his wife and daughter were at his bedside.