The crisis over the Iranian election has been our lead story for most of the week. As with all our coverage, we have been careful to report what both Ahmadinejad and Mousavi supporters are saying. Similarly, we have taken care to label the pictures we use, explaining what they are of. 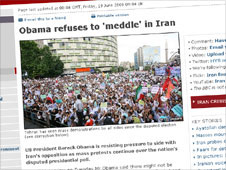 However, on Wednesday 17 June we made a mistake in a picture caption published on BBC News online. In the story Obama refuses to 'meddle' in Iran, we mistakenly stated that a Getty agency picture of a pro-Ahmadinejad rally was a pro-Mousavi rally.

Some blogs, including WhatReallyhappened.com, are pointing out that the LA Times used a similar photograph which showed President Ahmadinejad waving to supporters. The Getty pictures we received did not show Mr Ahmadinejad.

When a reader contacted us about it, we checked our caption and corrected it. We're sorry for the mistake and have added a note explaining the correction to the story.