The BBC has several correspondents inside Iran.

Heavy restrictions have now been placed on the BBC and other foreign news organisations. Reporters are not allowed to cover unauthorised gatherings or move around freely in Tehran - though there are no controls over what they can say.

Although they are facing difficulties, they have been filing regularly and their reports have appeared on radio, TV and online (recent examples: Q&A: Latest from Tehran; Iran attempts to restrict media).

We also have a Persian service for TV, radio and online which offers BBC news to an Iranian audience both in Iran and around the world. 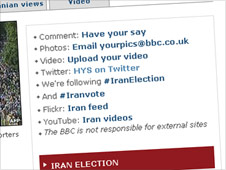 So why are we also monitoring social media like the microblogging service Twitter and linking to its search results for the Iran elections?

Simply put, it's because among the various impediments to reporting, there's a huge ongoing, informed and informative discussion in Iran between people who care deeply about what is happening there and who are themselves monitoring everything they can, then circulating the most useful information and links.

It should be noted that the majority of messages on Twitter, both within Iran and abroad, are from Mousavi sympathisers - a factor we need to allow for.

There's no filter or editorial process other than the capacity of those involved to correct or contradict each other; my colleague Richard Sambrook has written more about this on his personal blog (Twittering the uprising?).

What really stands out is the range of sources, voices and angles to be looked into. There's no hierarchy: everything's on merit, and there is of course a new set of challenges for our staff - chiefly editorial challenges, as well as a kind of chase as social media services appear and disappear in what The Times' Judith Evans describes as "an electronic game of cat and mouse".

I've written here before about our use of Twitter in another context, and spoke then about the need for us (BBC News) to exercise care and to check information before publishing it as fact - and that remains true. We'll check anything we want to include in our account of what is actually happening. But we also want to link what we do with the flow of discussion, links, rumours and reports which is providing another channel for people following the story.

For more on other ways to follow the story see our list of links and Ben Parr at Mashable has some good tips for using some of these sites.