Thanks from BBC News

BBC News audiences helped us out with reporting the news in record numbers on Monday.

Over 35,000 people sent us stills and video of the heavy snow across much of the UK. This was a record both for the sheer number of pictures and almost certainly for the size of the audience response to a news event in the UK.

As well as sending us your pictures, audiences watched and read a lot of BBC News.

The BBC1 news programmes were also avidly watched. Breakfast's audience was 1.8 million, a share of 38%; the News at One scored a huge 5.1 million and a share of 44 per cent; the Six ranked even higher with 7.1 million (30 per cent share) and the Ten reached the heights of 7.4 million (32 per cent share).

Whenever there has been a big news story like this we assess it afterwards and see what we can learn from it. Do please let us know what you thought of the BBC's information service across news (national and regional) and weather.

Your pictures and video certainly made it clear that people were having a lot of fun out there.

Lastly, I'd like to pay tribute to our reporters and TV crews who have been out in the cold and snow for hours on end. 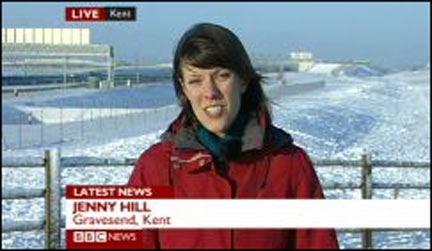