The secondary school league tables for England are published at 0930 GMT this Thursday, and this website will, as usual, be making them available to you, in detail, as soon as possible thereafter.

But not in as much detail as usual, or as we'd have liked, at least to begin with.

This is because the government has tightened up on the media's pre-release access to official statistics.

Legislation now limits the access that anyone not directly involved in compiling statistics should have before they are published and available to all. The aim is to avoid any undermining of public trust by ensuring that data of this sort is collected, stored and prepared for publication with due care, and that the process is not vulnerable to political or any other interference.

So this week we'll aim to publish tables for each of England's 150 local authorities, ranking schools on their Level 2 (including GCSE) and CVA (associated Contextual Value Added) results, and on their Level 3 (including A-level) results and - new this year - Level 3 CVA. 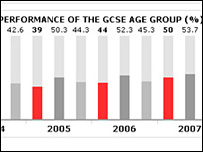 We'll also aim to provide a 'top/bottom 200' tables nationally on the various measures - including schools that fall into the controversial National Challenge category of less than 30% good GCSEs with English and Maths, or equivalents.

But we will not, initially, be able to do the usual page-for-every-school service or the same comprehensive overview and analysis we usually provide. We reported on this here.

In the past, we have generally got the official results a week in advance, under embargo, to compile and check tables. This time, we will have had sight of the data for just 24 hours.

But the school results that are supplied to the news media are not in a readily accessible form.

In the case of the secondary schools, there are two large spreadsheets, each with a number of pages, covering GCSE and A-level and equivalent results and associated local and national averages and other information.

Each sheet has dozens of columns, and a row for each school and college.

Formatting the essential benchmarks from all this for publication, using computer scripts to interrogate the data, compiling and then proofreading them, takes hours of work.

A statement published on the DCSF website says: "The Pre-release Access to Official Statistics Order 2008 that came into force on 1 December 2008 and the Code of Practice for Official Statistics published on 6 January 2009 means the Department must change the arrangements for the release of the two sets of achievement and attainment tables from previous years."

We could, perhaps, simply wait until the statistics were published officially and then commence work.

But that would mean rather meaningless news stories saying "the league tables have been published - but we cannot bring you them yet".

It would risk turning the process into a rush to publish the data, with little room for checking or analysis.

To keep this in perspective, we are not talking about market sensitive financial information, but simply the practicalities of handling and commenting on exam results which the schools themselves have had since the late summer and often have published themselves anyway.

And it's not about the rights and wrongs of having the school league tables (about which there is considerable debate), it is about how they can best be presented to the public and in particular to parents.

The impact of the new legislation on the school league tables does not seem to have been foreseen within the Department for Children, Schools and Families.

It was, according to the Schools Secretary Ed Balls, an "unintended consequence" - and he is minded to legislate to correct it for next year.

For now, senior editorial figures at the BBC have, with national newspapers and the Press Association, signed a joint letter of complaint to DCSF chief statistician Malcolm Britton.

It says, in part: "With less than 24 hours' preparation time, it will be much more difficult to produce any meaningful analysis of the information and to ensure there are no errors.

"The result is that the main aim of the government and of our organisations - to provide an essential service to parents choosing a secondary school for their sons and daughters - will be thwarted. This is a service which we believe your office also values."

Providing you with the source data that underlies the news stories we cover is an increasingly important aspect of what we do, especially on the website.

There are new ways being developed of presenting and visualising data on the web, and we see that as a growing part of our journalism, an opportunity to interpret information and present it to you in new ways.

But in order to do that, we rely on being able to get access to the source data in time to properly order and make sense of it.