News on the go

How do you get your news at different times of the day? When do you want headlines on the radio and when do you sit down and watch a TV bulletin or log on to see what's happening? And, of particular interest to us right now, how do you keep up to date if you're out and about or commuting?

We've been carrying out some audience research to ask people these questions, and we've been specifically asking whether and when they use their mobiles to get news (or sport, or weather or travel). And if they don't, whether they ever would.

As part of the research, volunteers were asked to fill in news diaries, drawing a chart to show when and where they normally get their news.

The results showed:
• Most people were getting their news and information in a whole variety of different ways and from different places in the course of a day or a week
• The researchers described each person as having a "news ecosystem", where an individual might read several papers, hear news on the radio, look at various websites and/or TV channels for news
• The habits of the modern news consumer were described as "increasingly eclectic and multiplatform"
• As for mobiles, people were typically using them for headlines, major stories and areas of specific interest 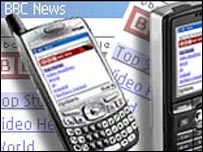 As mobile devices get smarter and connectivity better it seems reasonable to expect that people will increasingly be using them to do some of the things they already do on a desktop PC - look at a map, check a train time, buy something online, look at headlines or football results.

Take-up of news on mobiles is indeed increasing. For the BBC's mobile services overall, there are currently about 3.2m UK users a month, and this has grown by 25% over the past year.* But that number is still very small compared with those accessing the BBC website overall (22m unique users per week**). My colleague Paul Brannan wrote about some of the possible reasons for this earlier in the year - cost (data and handsets) being one of them.

But on the basis that more people might take to getting their news via mobile if they try it, we're running a campaign over the next few weeks to publicise how to get the BBC News website on a mobile phone, and simply to tell people it's there.

Here's what we'll be showing on the website. What do you think? Do you have a "news ecosystem"? Will your mobile overtake your PC one day as the way you get online news and information - or maybe it already has?

* This is claimed reach on the M:Metrics monthly survey; it was growing faster up until Sept 07, but is now 26% year on year (Sept 07-Sept 08).
** Unique users are not the same as "people" so the figures are not directly comparable but this is now our currency for reach.