Each week on Newswatch, complaints come and go from members of the public about what some see as mistaken news priorities, bias, inaccuracy, or trivialisation. But what remains constant, and what seems to elicit the ire of viewers more than anything else, is one topic: sloppy grammar. Everyone seems to have their personal bugbear, be it the use of "less" instead of "fewer", the split infinitive, or the use of a plural noun with a singular verb. And many feel that standards have slipped in recent years.

We thought we'd put this to the test, and invited a number of BBC journalists to demonstrate their grammatical expertise - or otherwise - on camera. Perhaps surprisingly, five presenters or correspondents were brave enough to take up the challenge: spotting 20 deliberate grammatical errors which we'd inserted in a mock conversation between a presenter and a correspondent. 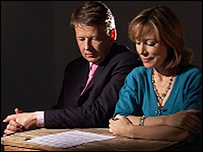 Wedged into an old school desk under hot lights, they all felt the pressure. Breakfast presenters Bill Turnbull and Sian Williams took part as a team of two, but disagreed over whether to turn a "less" into a "fewer". Newsnight's Michael Crick admitted he received frequent e-mails from viewers correcting his grammar. Defence correspondent Caroline Wyatt was concerned about disgracing her old school English teacher. And Sue Littlemore complained that expectations were high for someone who's been reporting on Education for the past 10 years, saying that you wouldn't expect a Health correspondent to be able to perform surgery.

The results weren't quite as clear as we'd expected. One journalist spotted a mistake we didn't think we'd made. Another sent us evidence from the Oxford University Press that the noun "family" could take a plural verb instead of a singular. There was debate over phrases which were grammatically correct, but simply sounded wrong when you spoke them out loud. And anyway, if we're all used to hearing phrases like "to boldly go", is it just pedantic to object?

Our guinea-pigs spotted between 12 and 19 of the 20 mistakes - and on this week's programme you can see who scored what. So as not to spoil the surprise, after the programme's shown I'll put the questions themselves up here so you can see how you would do.