Ten thousand complaints and rising. Questions in the House from outraged MPs. Gordon Brown calls it "inappropriate and unacceptable". BBC radio boss Tim Davie apologises unreservedly and uses the "unacceptable" word too. Ofcom and the BBC Trust circle menacingly. And the woman at the centre of it all, Georgina Baillie, reportedly tells the Sun she wants them sacked.

You'll have your own views about what Russell Brand and Jonathan Ross did during that prank call to actor Andrew Sachs.

But if you thought the British public believe it's an open and shut case against the Radio 2 pair, maybe it's time for a rethink.

Audiences across the BBC are responding in very different ways. My colleagues on Radio 4, 5Live, in television and the World Service are reporting, broadly speaking, condemnation. Younger audiences are saying something different in our experience.

The first clue came when we started reporting the story on Monday and we noted an unusually silent response from Radio 1's 10.5 million listeners. As the story grew, splashed on the tabloids and featuring prominently in many of the broadsheets -a response began. But a different one. 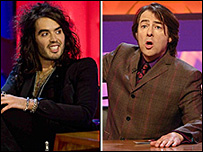 "Get over it: a fuss about nothing," was typical. Some listeners texted in to point out that Ross and Brand were there to appeal to younger audiences with edgy humour. Not every gag by alternative comics hits the mark, does it? Errors of judgement are surely not a sacking offence? And anyway it was funny, wasn't it?

So the media storm grows. There's anger: some genuine, some of it synthetic. Some of it comes from the BBC's usual critics. For media folk profile and salary-envy and schaedenfreude may play a part in all this. But how many heard the original transmission and how many are responding to the newspapers' quotes or others' arguments? I'm not here to defend or attack anyone - but there is an alternative view we are seeing strongly expressed by our young audience which is certainly worth wider consideration.

The prime minister's intervention amazed some listeners: "The financial markets are wrecked and all he can do is talk about a petty joke." Also: "Everybody needs to calm down"; "Anybody who thinks it's disgusting should get a grip"; "Why should they be punished? This is the normal chit-chat of a man"; "It was funny, a joke. People are so boring"; "Leave Russell alone"; "Russell is hilarious"; "Jonathan Ross is a great presenter"; "Hey, they are comedians - it's their job". And the favourite phrase: "It's been blown out of all proportion."

When we started covering the story on Newsbeat - the audience response was running two-to-one in Ross's and Brand's favour - now it's swelled to six-to-one. David Sillito's excellent piece on the News at Ten on Tuesday illustrated this with a "vox pop" of older and younger audiences to BBC shows.

Still an open and shut case?