Caught up in a conspiracy theory

I've just been sent a video on the net which accuses me of being "Eurotrash" and of producing a "hit piece" about 9/11. 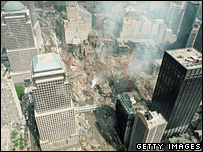 Almost inevitably I've been enmeshed in the ever growing net of the conspiracy theory. They've added my name to a long list of imagined conspirators - the secret services, police, people who worked in the building, first responders, the fire service, city officials...and also those who they think have deliberately set out to cover up this huge conspiracy - the official investigators, the world's media...

Last month we were in New York to film the seventh anniversary of 9/11 at Ground Zero for a new programme about the allegation of a conspiracy to deliberately destroy the three skyscrapers at the World Trade Centre. "The Conspiracy Files: 9/11 - The Truth Behind The Third Tower" is to be broadcast at 9pm on BBC Two on Sunday 26th October 2008.

We also filmed self-styled truthers who think 9/11 was an inside job, either carried out or allowed by the US government; and they needed to destroy a third tower at the World Trade Center, Tower 7, which they think contained the plans for the plot.

It is a fact that Tower 7 had some interesting tenants - the CIA, the Secret Service, the Department of Defense and the Office of Emergency Management - the very office which was intended to co-ordinate a response to a disaster or terrorist attack.

When we were filming we were surprised that some of the truthers seemed particularly keen to interview us on camera about the last programme we made about this third tower at 9/11. They think we have deliberately set out to conceal the truth. As one said to me "You already know the truth."

The group who made the video are called "We are change". They claim we misrepresented the chronology involving one important witness who we interviewed in our last programme about 9/11.

The first responder Barry Jennings was trapped inside the building for several hours along with another New York City official. They were crucial witnesses to what was going on inside Tower 7 after everyone had been evacuated shortly after the Twin Towers were hit by the two planes.

As I tried to explain to them at the time, we recorded a long interview with Barry Jennings. We also carefully considered other information and came to our own view based on all of that.

As the two men tried to get out of the skyscraper they were suddenly thrown into darkness. Barry Jennings said he heard explosions. We think it is likely that this was when Tower 1 collapsed, showering debris onto Tower 7.

We have also recently recorded an interview with the other man there, Michael Hess.

Michael Hess was Mayor Rudolf Giuliani's chief lawyer, in charge of 800 New York City lawyers. In his first interview since 9/11 he confirms our timeline. Hess says all the lights went out and he felt the building shake like an earthquake and he adds that he did not hear explosions.

In his mind he thought there might have been an explosion. In the only interview he did on 9/11 he told a reporter he had "walked down to the eighth floor where there was an explosion."

But as our interview with him shows, he is now certain that he did not hear an explosion. He just assumed on the day it could have been an explosion because he had witnessed the lights going out, the staircase filling with smoke and the building shaking vigorously.

We now know, courtesy of the final official report on 9/11 [pdf link] by the National Institute of Standards and Technology, that the official investigators think that two areas of Tower 7 were badly hit when the 1,350 foot Tower 1 collapsed. Seven columns were severed on the southwest corner and they suggest debris also hit the top centre face of Tower 7.

The lead investigator of NIST told me that "it's likely that all of those huge failures and damage really caused noises that were incredibly loud."

If our timeline is wrong then why didn't Barry Jennings and Michael Hess see and hear the moment of impact when Tower 1 fell. It must have been very loud.

The group also criticizes us for not including one sentence from an interview with the owner Larry Silverstein. Apologies now because this gets very complicated. However, some people think hidden in this is a vital clue that can unravel the biggest conspiracy in modern times.

The theory is that the owner Larry Silverstein is meant to have implicated himself in a conspiracy to destroy the buildings he owned and leased at the World Trade Center. And what exactly did he say that supposedly gave it all away?

He said "pull it" which some people interpret as an order to demolish the building.

The interview was conducted the year after 9/11 and Larry Silverstein said:

"I remember getting a call from the fire department commander, telling me that they were not sure they were gonna be able to contain the fire, and I said, "We've had such terrible loss of life, maybe the smartest thing to do is pull it."

"We are change" activists think there is something sinister in the fact that we did not include an extra sentence when Larry Silverstein said:

"And they made that decision to pull and we watched the building collapse."

I don't have a problem talking about it. And just for the avoidance of any doubt we included it in the Worldwide version and we will include it in the new programme for BBC Two.

However, I do not understand how that implicates the owner in any wrongdoing. Interestingly one prominent website, 9/11 Research which is highly critical of the official explanation, is not convinced either and thinks it might even be "bait" to discredit the truth movement.

The crucial words seem to be "pull it" and Larry Silverstein's spokesman provides an explanation:

"Mr Silverstein expressed his view that the most important thing was to protect the safety of those fire fighters, including, if necessary, to have them withdraw from the building."

I talked to the man who assumed command of the New York Fire Department that day. Chief Daniel Nigro told me that it was his decision to decide what to do about Tower 7.

In other words there is no way Larry Silverstein could have ordered the fire department to leave the building and wait for it to be demolished. As Chief Nigro told me the fire service was not part of conspiracy, they were doing their job:

"When we are in charge of a building, we are in charge and that decision will be the fire chiefs and his alone...That's why I know there is no conspiracy, because for me to be part of that would be obscene and it disgusts me to even think of it."

For good measure the truthers at Ground Zero added one final criticism, saying that the BBC is funded by General Electric. I'm not sure what that's based on, but I can say with absolute, yes absolute certainty, it isn't...nor have I ever been part of a conspiracy to cover up what really went on 9/11.