Did Russia invade Georgia or was its military operation there a case of humanitarian intervention?

This is the nub of the propaganda war that has been fought out between the Georgians (with increasingly vocal backing from the US and the EU) and the Russians (with the support of the separatist leaderships in South Ossetia and Abkhazia and countries like Serbia).

The World Tonight - along with much of the rest of the BBC and other news organisations - has given the conflict over the past two weeks extensive coverage. Before the fighting escalated many people - including journalists covering the story - had barely heard of the places that have become such familiar names. 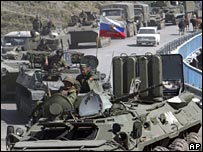 I think The World Tonight is an exception to this. We have been covering the simmering conflict for several months as tensions rose following the recognition of Kosovo's independence from Serbia by the US and much of the EU in February - a move seen as a breach of international law by Russia, but seen as a precedent by Abkhazia and South Ossetia who compare their situation in Georgia with that of Kosovo in Serbia - another story we have followed closely. So hopefully our listeners have been well-placed to make sense of the conflict when it escalated so dramatically a fortnight ago with the Georgian assault on the Ossetian capital, Tskhinvali.

I have been asked why we have done as much as we have on the story. In one sense, the increase in tension between Russia and the West that the conflict has added to is obviously an important development. Our presenter Robin Lustig has blogged on this. Some observers have even pointed out that if Georgia had already become a member of NATO (something its leaders as well as the US and the UK say they want), the alliance could well be at war with Russia today. 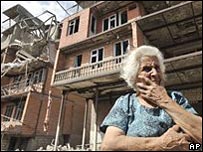 The other reason we have devoted considerable time to the story is the fact that it is August and at this time of year there are usually fewer big stories around which would have competed with the Georgia story. I was in France on holiday when the fighting started and the story dominated the airwaves there too.

Our coverage has attracted much comment from audiences too. Like most conflicts, this one has polarised many listeners and we have been accused of bias.

One listener wrote: "Why does the BBC insist on talking about a Russian 'invasion' of Georgia? If Russia has invaded Georgia, how come Georgia's government is still in place, a peace agreement signed, troop withdrawals underway? Russian troops are in Georgia, chiefly in areas not controlled by Tbilisi for a decade or more, but this is not the same as invading Georgia."

Another wrote:"I listen to you every night and like the usual unbiased and hard questioning approach to get both sides of an issue. But last night's programme left me wondering why your presenters did not challenge the Russian view of what is happening in Georgia."

First off, I have to acknowledge that we did use the term "invasion" once but this was a slip because I think the term is best avoided as it could be interpreted as taking the Georgian side of the argument.

We have striven to be as impartial as possible in reporting this conflict. But this has not been easy. As my colleague Jon Williams has blogged, it has been difficult for our reporters in the region to get a full picture of what has been going on, though I would say they have been coping with those difficulties very well. The increasing sophistication of both sides in presenting their case via English-speaking politicians and military spokesmen has also made it more difficult for newsdesks - as Peter Wilby argued in the Guardian on Monday - and has increased the onus on journalists to inform themselves about the ins and outs of the dispute.

I hope you agree with me that we have approached our coverage of the conflict from an informed perspective and we have done our audiences a service.