Have you had enough of the Olympics already?

Well, with BBC1 already showing the spectacular opening ceremony in full, tonight's BBC News at Six has its own high wire act to perform. How do we give audiences the full highlights of what's undoubtedly a great sporting event without driving away those who've seen it already - or worse - don't want to see it at all?

Luckily, despite the fact August has dawned, bringing with it the summer silly season, we have plenty of other stories to keep you watching.

With only 30 minutes of air time what exactly is the news today? Well, like it or not, Beijing has put on one of the most memorable ceremonies any of us have ever seen. Today is not about sport but about China making a statement to the world. It's worked - after years of planning - the design, the choreography, the lighting of this three hour performance guarantees its place at the top of the bulletin. 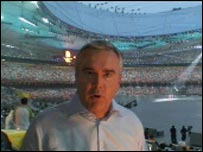 So what else? The housing market and the strains of the credit crunch continue to claim a good slot on the Six. Today's repossession figures are startling and on another day, could easily be our lead story.

For those of you who look beyond our shores, strong pictures of fierce fighting in the disputed region of South Ossetia will be explained and analysed. Not a natural story for the Six? With Russia threatening a robust response, it's right to be in the show.

So, keep watching - yes there's lots on the Olympics but remember it is only once every four years, and who knows, we might win a medal or two.