Yesterday a man drove a bulldozer through a street in Jerusalem with the aim of killing a number of Israeli Jews.

The incident happened near the BBC's bureau and our correspondent immediately ran to the scene. He caught on camera the man being shot dead. 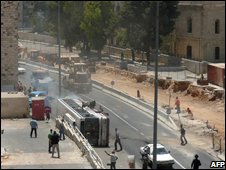 There have been a number of complaints from viewers about us showing on television the moment of death. I fully understand the concerns, but this is why I took the decision to show it.

After some discussion with colleagues I decided that on the Six O'Clock News we should freeze the images just before the man was shot - letting only the sound of the incident run on. I took the view that the images were too disturbing to show to an early evening audience because, pre-watershed, children would be watching.

I took a different view at Ten - deciding to run the pictures in full with a clear warning that the audience was about to see images of a man being shot dead. This was not an easy decision - we never want to shock for the sake of it, or to sensationalise the news.

However, equally we don't want to sanitise the news for what is a mature and thoughtful audience. It's also important to think about what the audience actually saw - the shot was not close-up, the action was slightly obscured because it was happening behind the bulldozer's windscreen, the men's faces were not visible, and no blood was seen.

The scene was disturbing, and it was a fine call, but I believe it is important and illuminating very occasionally to see the reality of violence.

The story also raised another difficult question: would it have gained quite so much coverage if it had not been caught on camera?

The answer is probably not - but we should not necessarily ignore the opportunity to show people what goes on when we are provided with it. We should however remind people that this is not the only violence, and set it in the context of other deaths - both Palestinian and Israeli - which we did last night.