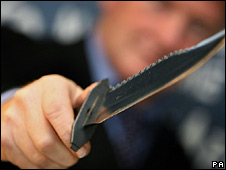 The latest figures make it clear that the number of young men carrying and using knives is increasing sharply. Clearly there's something to be concerned about; it's not just the media's hyperbole nor does it seem like a self-correcting, short term aberration in the statistics.

But for journalists, that's only the start of it. There are other questions.

How should news organisations report the real surge in knife crime? How much does tone and prominence distort the real picture? Is some coverage self-fulfilling prophecy? Does it spread fear and anxiety way beyond the rational?

Because the truth still remains that most of us are very, very, very unlikely to be a victim of knife crime. Most young men don't carry knives; most young people are not components of what some politicians are calling the 'broken society'.

Actually, I think most of us citizens know this; we're more likely to base our understanding of the world on our own experiences of it rather than on what we read in free papers on the bus to and from work. What we do need, though, as citizens is a press that helps our civic discourse - the debates and arguments we have about problems and what needs to be done to solve them.

When I explored this in a recent edition of BBC R4's Analysis, I found a clear gap between the press we need as citizens and the press we get, driven by editors' intuition, impact and high octane attention grabbing.

It's clear that the current spate of knife crime - the reasons why young men carry knives and occasionally use them - has complex causes and will need complex solutions.

Think about it for a moment: the only explanation for the sudden rise in carrying knives is that young men who didn't use to carry them do so now. The least likely reason for that is that they have become 'evil'. The most likely is that some set of 'nudges' have persuaded otherwise balanced, law-abiding young men that it's OK to arm themselves.

The brainchild of two behavioural economists in Chicago - Richard Thaler and Cass Sunstein - and an idea that's pretty trendy right now with some politicians.

Crudely, 'nudges' are the tiny influences on our behaviour that we might not notice at the time but which make us act differently, usually to fit in with others around us: eat better, drink less or, in the case of the lavatories at Schipol airport... well, read about that for yourself.

Nudges, however, are morally neutral. And may explain why a young man who feels 1% more afraid or 5% more in need of being one-of-the-crowd changes his behaviour 100% from being unarmed to armed.

A proper public discourse to find ways of reversing this trend would be subtle and nuanced - it would think broadly about causes and possible solutions. And we know, from experiments like Today's Citizens Juries back in 2005, that if ordinary citizens are given the time and space, they have exactly the kind of subtle and nuanced discussions that we need.

But it's a debate that's inhibited, prevented even, by the tendency to polarise or simplify. According to your taste in newspapers, you learn that politicians' plans are "half-baked" or "not tough enough" or the work of a "softie softie"...and anyway, everyone knows "there's one choice - prison".

The real challenge to our media - and our press in particular - is not whether they can avoid misrepresenting or distorting knife crime: it's part of the purpose of our media to draw things to our attention, however crudely.

It's whether it is capable of reporting it in a way that helps us citizens really think hard about possible solutions; or whether it makes us feel the problem is insoluble.