There's always a lot of chat about the brave new world where TV and the web are converging - but how much is it happening in reality?

With my hat on as editor of BBC Election programmes I can point to a very real example this Thursday night/Friday morning: the BBC Election Night programme.

It's become increasingly clear that the web has something extra to offer on election night. An elaborate network of opinion formers, activists and analysts collide online producing fact, rumour, and mood not found anywhere else. While guarded politicians offer the official line on radio and TV ("let's just wait and see" or "what you say is a disaster is really a triumph") the web provides the unvarnished truth about what the parties are really thinking. 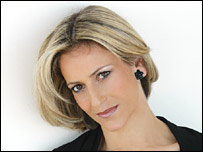 That's why we're harnessing these strengths as never before on Election Night. David Dimbleby and Nick Robinson will be in the studio with some of Britain's top politicians bringing authority and analysis to proceedings as the BBC has always done; but a new addition is Emily Maitlis who'll be sifting the chatter online with the help of some of the UK's most committed political bloggers; Iain Dale, Luke Akehurst and Alix Mortimer.

They'll be using their contacts to provide us with immediate reaction from the parties to the night's results. Our website colleagues will be providing a special webpage with the best of each of their blogs - all hosted by Ms Maitlis at "Emily's Election".

That's alongside the normal comprehensive online offering which includes a map of all the results; the chance to find out what happens where you've voted; and at-a-glance look at how the night develops.

This year's local elections promise to be the most politically significant for years. They'll also see a step change in how we use TV and online to cover the story. So put on a pot of strong coffee, turn on, log on, and join in.