BBC World started going off air in China last week. It wasn't a sporadic technical fault, but a reaction by the authorities to one particular story - Tibet.

As a presenter began reading the introduction to a report on events in Tibet, screens in China showing BBC World would suddenly go black. It wasn't consistent - some reports would go out unmolested one hour, only to be taken off air the next. Whenever the channel moved onto other stories, normal service was resumed.

Nevertheless it was clear reporting on the story was incurring the wrath of the censors.

The question for us - how should we react? 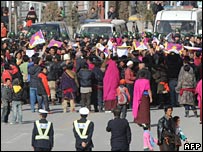 The primary story was about events in Tibet. Whether or not BBC World was being blacked out in China would have no impact on how we reported those events - it simply denied Chinese viewers our coverage.

But the reaction of the Chinese authorities was part of the wider story, an attempt to suppress coverage, so we duly reported that too.

The BBC's James Reynolds, who is based in Beijing, came up with a very simple but effective means of showing what was happening.

I recently had a meeting with a Chinese embassy media official. It is clear that their understanding of how media works is much more sophisticated. Their filtering methods are also more targetted. In the run up to the Games they are trying to be more subtle in their relationship with international journalists. But it is clear that when the going gets tough the censors get busy.
Charlie Beckett, Polis@LSE
I blogged about this at:
www.charliebeckett.org

Reporting on being blacked out is about all you can do. It's not really your task to get your signal beyond the censorship of the state, because that in and of itself is a value judgment of sorts.

It's kind of self-selecting. The people the state doesn't want to hear about such matters are also generally the sort of people who can find ways to bypass censorship to begin with.

*Easy*? No. But if the BBC *actively* tried to bypass censorship, then it'd be more likely to *all* go black - then who will be there to report on what's going on?

If they're blacking you out, you're doing something right.

How should you react? Look to your Charter for guidance, and do your jobs properly.

Surely the BBC's desire to increase its Chinese audience (not to mention the lovely advertising revenue from all those pretty China Tourism ads on BBC America, etc.) should not trump the importance of telling the truth.

BBC is the reporting I trust most. You range from highly competent to inspiring, as in the present instance - to consistently depressing (on the environment). The only thing that can change the latter, as long as BBC retains its integrity, is for the world's corporate leaders and politicians to start caring about the long-term future.

How should you react?

Just insert short announcements during other "harmless" stories that the BBC is receiving reports that the stories about Tibet on the channel are being censored in China.

Good on James filming himself watching 2 televisions to reveal the blackouts.
It would be good if the BBC could remind all Chinese viewers how disturbing the Tibetan situation is to many of us outside China. How can a peoples most revered leader be unable to return to his homeland?