From Gaza to Harvard

It’s a long way from Gaza to Cambridge, Massachusetts. And not just in distance.

The last few months of my posting as the BBC’s Middle East bureau editor were dominated by our efforts to free Alan Johnston, my friend and colleague.

They were long days of anxious meetings with various characters from around the region, punctuated with brief, dusty and often hair-raising journeys into and out of the Gaza Strip. 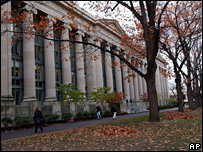 These days, I’m to be found striding purposefully around the pristine campus of one of America’s oldest and finest universities on a one-year fellowship programme at Harvard University. (In truth, in this particularly snowy New England winter, I’m more often to be found tiptoeing inelegantly around enormous piles of slush).

It’s a big privilege, and one for which I am very grateful to my bosses at the BBC and the generous benefactors behind the Nieman Journalism Fellowships.

There are 30 journalists on the programme at Harvard, and one thing that’s immediately striking is the depth of the crisis in the American newspaper industry. A number of my US colleagues here do not know if they will have jobs to go back to. Every week seems to bring further cutbacks as the industry struggles to redefine itself for the internet age.

Part of the fallout from that is that foreign coverage now seems to be left in the hands of the New York Times, the Washington Post and a couple of other big papers. Smaller papers, and even the famous local broadsheet here the Boston Globe, have dispensed with their own reporters overseas and rely heavily on news agency coverage.

The BBC, and its brand of international news coverage, seems to be doing reasonably well in the States. My research has been completely unscientific and based almost entirely in and around Boston. (I suspect that in large tracts between America’s east and west coasts we may be completely unknown).

However, it does seem to me encouraging that a number of the students, professors and other university-affiliated people I come across (including my Lebanese-American barber!) get their news from the BBC; either on the web or through rebroadcasts of the World Service on National Public Radio. I have even uncovered a few hardy pioneers who regularly watch our new nightly TV bulletin from Washington on BBC America.

At least among America’s intelligentsia, there is in this election year a real thirst for proper, reliable international news. The kind that Alan Johnston and all the other fine BBC foreign correspondents in so many different parts of the world are delivering every day.

Sounds like you are having a nice time. Hope the weather improves and you get the chance to get out and about more.

I know when I went to the States last year to meet some friends from online that most of them said they got their news primarily from the BBC. They're geographically quite widespread, but of course we were all middle class to a greater or lesser extent.

Ah, fair Harvard. I was a Nieman Fellow there in 1998/99. It's a truly magical experience. It's important, I think, for journalists to step back and take stock every now and then, to stretch their brains in different directions. I'm trying to recreate that Nieman experience by spending a year at Oxford. It's enlightening to spend my time consuming the news as opposed to producing it. The BBC is to be commended for supporting this kind of endeavor. Enjoy yourself, Simon. I recommend the cannoli from Mike's in the North End. The best in the world.