Name two daily news programmes on British television which concentrate only on international events. Can't do it? Actually there's only one - it runs on the digital channel BBC Four and until Friday it was known as The World.

From tonight it has a new name, World News Today, and a new slot, 7pm. But some things stay the same.

Its focus remains on putting global events into context, explaining and analysing significant stories using the BBC's huge network of correspondents around the globe.

It's unashamedly serious; but that doesn't mean it's not engaging or stimulating. And it's still going to be presented by Zeinab Badawi, who is an outstanding presenter and interviewer.

The reason for the change? Well the programme has always been produced by BBC World on behalf of BBC Four, and we've been gradually developing the concept of World News Today across our key hours of the day.

It made sense to extend it to the programme we make for BBC Four, using essentially the same structure and taking the opportunity to refresh the graphics and music which identifies the programme. 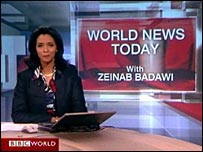 We will soon have four editions of World News Today on air, sharing the same structure and appearance, but each targeted at a slightly different audience. Tonight's programme will be for BBC Four viewers in Britain and, simultaneously, BBC World's audiences in continental Europe. Others are (or will be) aimed at the USA, South Asia and the Far East.

At a time when foreign news coverage is under pressure in many areas of the British media, we're proud to produce a programme which aims to produce a truly international perspective on events, and we think there's demand out there from among you, the audience.

As a taster for tonight, we'll be looking at sanctions against Sudan, the crisis facing the leadership of the Israeli government, and the closure of one of the biggest TV stations in Venezuela. We'd love to know what you think, whether you're watching in the UK or elsewhere.

There is indeed only one, but there used to be two, before you axed the World News feed on News 24 between 8:30 and 9:00 in the morning.

Now you're expanding the one survivor. How long before it becomes too expensive again and gets axed completely?

And the benefit of scheduling it so it clashes with Channel 4 News is...?

At least when you ran at the same time as More4News, there was always the More4 +1 option, so you could watch both if you so chose...

Shame it now clashes with C4 News. I liked the 8pm slot, but now when I get in from work at 7 I'll still turn to C4 News for an overall briefing. In the old slot I then turned over if there was something in the international field that I wanted to know more about. Will it be available for streaming/download after broadcast so I can pretend it's still on at 8?

I love the program. It still has the depth,focus and the edge, that is lacking on todays tv. Ms. Badawi is fasinating and the style of the program fits her. Classy lady indeed. Graphics and the music sets the tune for the show. This show is for intelligent,sound minded people.

This seems more about re-branding and putting something up against C4's excellent abd established newa.

Why not turn the transmitter on half-an-hour earlier or stick it on at eight? That way we would could still watch the cricket hilights and be informed about world events!

I have to agree with what people have said here - C4 news is the finest news programme on television, and I'm always going to watch that rather than this - why make them clash - I'm sure they're both aimed at similar audiences, but you're not going to win against the superb C4N

At 07:30 PM on 29 May 2007, David wrote:
Shame it now clashes with C4 News. I liked the 8pm slot, but now when I get in from work at 7 I'll still turn to C4 News for an overall briefing. In the old slot I then turned over if there was something in the international field that I wanted to know more about. Will it be available for streaming/download after broadcast so I can pretend it's still on at 8?

David - you can do what you describe no problem with a PVR (Personal Video recorder). Want to watch Ch4 news at 7pm followed by BBC World News at 8pm - you can easily with a PVR.

Some PVRs also have a useful function called 'series link' where you tell the recorder to record every single episode of say Dr Who or the News at 7pm from now on. It will do so until you tell it to stop.

Nowadays the technology exists so that you can watch your favourite programmes at exactly the time you want (except before the time they are originally broadcast!)

Like others, I cannot understand why you would put this up against Channel 4 News. I already stopped watching The World in order to catch More4 News. If anything you should put this on at 8.30 so that it doesn't clash with any other serious news bulletin. A very strange decision.

Similar to some of the other commenters, it's a shame this is on at 7pm UK time.

I had just started getting into The World at 8pm, after an hour of Channel 4 News. Some serious news reporting, rather than the knockabout pantomime that is the BBC 6 O'Clock News.

Put it back at 8pm, and I might just watch it!

Baffled that you should put this on at the same time as C4 news. If you want to compete with C4's excellent political coverage -- which The World at 8pm certainly did -- try making 'Newsround at 6' a bit less silly. This will only split the audience.

I've never understood why you deprive uk audiences of the global perspective offered by BBC World. It's like cutting out the international news from the news website. The advertising could easily be filtered out to overcome the legal requirement for the BBC not to present UK licence payers with advertising. Some people prefer to find out about the world, even if it's just about the weather in South America for example.

This program is not just broadcast in the UK so people out there please understand. It is also on BBC WORLD. That you may understand it is not just uk time. It is European primetime.

Hopefully the program will actually be looking at the world through the eyes of world opinion, not just the usual, amazingly biased, British version of world events.
maybe we'll actually get some balanced reporting. It seems that BBC is scared to criticize certain countries and all too eager to criticize others.

You give much more positive press cover to countries that we gain economically from (with the exception of Russia), especially the US and Israel.

And i am fed up of only hearing about the countries in Africa in which we have a vested interest in resources.
Why should we care more about conflict in Zimbabwe Congo Sudan or Nigeria when the people in other poorer countries, without many resources, are dying of much more basic needs like hunger and poverty, and in far greater numbers.

It seems as if the government gives time only to the problems in richer countries, so they can justify to the public whatever measures are needed to gain control of recourses in that country at a later date. whether its military intervention in Sudan, sending troops into Zimbabwe or any sort of intervention, none of these would happen if the UN did not gain economically from their actions and we would not be hearing anything about them.

Sandy, I have a TiVo and SkyHD, so I know about PVRs. But I do prefer to watch my news live.

At 02:52 PM on 31 May 2007, Claude wrote:
This program is not just broadcast in the UK so people out there please understand. It is also on BBC WORLD. That you may understand it is not just uk time. It is European primetime.

Claude, understood - but Richard Porter's original blog posting is about its broadcast on UK TV.

You are simply not going to be able to compete against C4 News in the UK. It's a non-starter. I tend to get home a few minutes either side of 7 most days, and the TV is switched on by the simple expedient of pressing the "4" button so I can listen to some real, balanced news coverage while I get changed etc.

If I want biased, neo-Labour supporting politically correct garbage then I will turn to News 24. The World @ 8pm was a nice idea and I sometimes watched it. Now ? Not a snowballs chance in hell...

It's a fine show, but if you really want to get an edge on C4, try reporting ALL the news 20 minutes before it actually happens. Then lose the tapes and just move on.

9.11 ist pain in your neck. We want the truth from the Bush Broadcasting Corp!