The Editors' blog is moving

As of Thursday, the Editors' blog will move to a different address on the BBC News website.

While this page will no longer be updated, it will stay here for reference.

We've had a huge response to our class calculator this week, particularly across social media, following a major survey by BBC Lab UK. The survey suggests that traditional categories of working, middle and upper class are outdated and we all fit in to one of seven new classes.

The class calculator - which lets you work out where you might fit in amongst the new categories - has attracted about six million page views on the BBC News site, making it the second most popular article of 2013 to date. (The most viewed article this year has been the helicopter crash in Vauxhall in January.) Nearly 1.9 million of those views have come from those of you accessing the site on mobiles and tablets.

But one thing that really stands out is how widely the story has been shared across social media, with more than 300,000 shares so far. More than a quarter of links to the calculator have come from social networking sites.

More than half a million referrals came from Facebook alone, and about 107,000 from Twitter. This is a much higher number than we usually see shared across social media. If you compare the class calculator with the other top stories of the week, usually about 5% of known referrals come from social media sites.

So why has it proven so popular with our audience? Michael Orwell, a producer at BBC Lab UK, worked closely on the survey and said one of the best things about the project was that the audience contributed to new research with top academics.

The calculator itself, produced by the BBC News Visual Journalism team in collaboration with BBC Knowledge and Learning, lets everyone engage with the new model and discover where they might fit in. 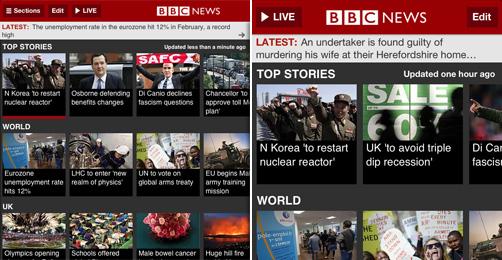 On Tuesday we are releasing an update to the BBC News iPhone and iPad app in the UK designed to make the app faster and more stable, with bigger, better quality images on the home screen.

We are busy doing some research and thinking at the moment about what people are looking for in our News apps in the longer term, but we thought that in the meantime, it was important to fix one or two bugs affecting some users of the existing app and to make it a better, slicker experience overall.

We want to make sure the current app remains a great way to get a quick overview of the top stories across a wide range of subjects, easy-to-scan on a mobile and, once the stories have loaded, handy to read offline too.

So, it will now be quicker to start up the app and to update it, and it should feel smoother and faster as you scroll and swipe through the screens and stories.

There is a new layout on iPad when you view the home screen in portrait mode - designed to show more headlines and make it easier to find the stories you're interested in.

Among the bugs that we've fixed is an issue that sometimes caused the app to get stuck when updating, and another where you sometimes saw duplicate stories within a single news category.

For our product team, these improvements required a fairly major reworking of the app's code. The good news is that they are now working from a more stable base which can be built on with new features and functionality. This revising of our code is something we've already done with our Android app, so we'll now be able to release upgrades simultaneously on both iOS and Android, which are by far the largest mobile platforms for us in terms of users. This latest update is already available internationally.

If you're a user of the app, or decide to try it out, we hope you'll like the improvements we've made. And as we think about our apps generally and plan our next steps, we'd like to hear about what you'd most like to see in future.

So it's here. School Report News Day 2013 is upon us - and about 1,000 schools are due to take part, making the news that matters to them. They will appear across BBC News - on TV, radio and online...

BBC Arabic and the complexities of the Arab world

By Faris Couri, editor of the BBC Arabic Service It is no secret that recent Arab uprisings have placed enormous burdens on the shoulders of BBC Arabic journalists responsible for reporting news from the region. Covering the Arab world...

Moving BBC World News, the BBC's largest television channel, from west London to New Broadcasting House in the centre of the city is a huge project that has taken years of planning. Relaunching and rebranding every hour of its 24...

BBC World News will soon be available in Burma. Those are words that, even six months ago, I would not have imagined writing. But Burma, a byword for media censorship and repression, is starting to open up. In September I...