One of the items in tonight's show is about darlings of Best Album of the Year lists, Fleet Foxes. Their eponymous debut album received rapturous reviews, as have their live gigs, and the prospect of featuring the band on the Culture Show has long been discussed. 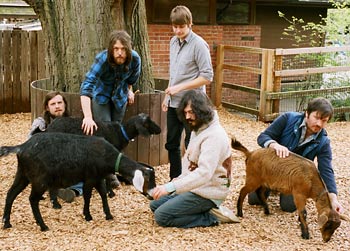 The review in the Times is typical, "Miraculously for a 21-year-old, Pecknold appears to have perfected the art of writing songs that appear not so much written as retrieved from your own subconscious." I think that my subconscious must be an altogether noisier and less harmonic place, because there is something about Fleet Foxes that makes me feel slightly ill.

I went out and bought the album when everyone (on the Culture Show team and beyond) was raving about it and set to listening. On about the sixth attempt my husband asked me why I was pulling 'that face' and I had to admit that something about the fragile beauty of the voices and the harmonies that I really wasn't enjoying. I could see that they were excellent musicians but my reaction was from the gut - it was time to give up trying to like Fleet Foxes.

Perhaps tonight's item will change my mind, but I really don't think so. Am I alone in disliking their music or is there a band of embarrassed fellow travellers out there? Our piece was recorded shortly before their gig at Camden's Roundhouse.