Where has the Culture Show gone?

We're off air until our special in the middle of June from the Royal Academy Summer Exhibition. If you've submitted an artwork for the show, or would like to let us know what you think when the exhibition opens on 8 June, then please post on the blog.

The series returns in earnest with a series of shows from the Manchester International Festival in July. We've already been drawing up our commissioning plan but if there's anything in particular you think we should cover then do let us know. Are there any Manchester-based artists, authors or bands that we should consider filming with, even if they aren't in the festival?

This will be my last blog post until the beginning of June as I'm off to work on the website for the Chelsea Flower Show, but if you miss me you can always follow me on Twitter - I'll be tweeting about culture rather than horticulture.

Because we're not currently updating the Culture Show blog it isn't possible to comment at present. If the blog returns in future the commenting facility will be reopened.

Let the Right One In - modern classic or over-hyped horror?

Vampires on film are always fashionable; it may seem that there is a glut of them at the moment, but that's just because they are high-profile hits like Twilight or well-publicised turkeys like Lesbian Vampire Killers. Next weekend sees the UK cinema release of an unusual addition to the horror cannon - a Swedish vampire film. 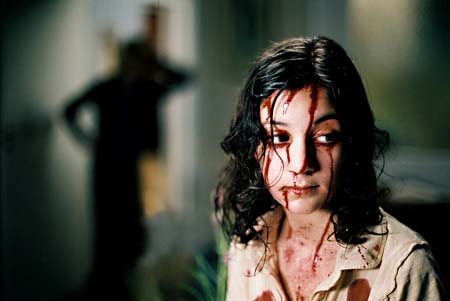 Let the Right One In (Lat den ratte komma in) has proved a phenomenon on the internet, recruiting an army of fans who championed it when it was released in the US last year and are now enraged by the sub-standard subtitles on DVD release. Icons of Fright's frame-by-frame comparison of some of the changes is a great example of how powerful the internet can be in exposing mistakes, although I would strongly advise you not to peek until you've seen the film.

My question was whether Let the Right One In would stand up to being watched by someone who isn't a huge genre fan and is rather wary of hype. I saw the film having avoided reading any reviews and I think the less you know about it the better, so I'll be vague in terms of plot, but I will say that I think it's remarkable. Focussing on lonely 12-year-old Oskar, and the mysterious Eli who moves into the flat next door, the film starts as an atmospheric story of pre-teen dislocation. What follows is both an exploration of the children's relationship and an investigation of some of the conventions of the vampire film. Let the Right One In is refreshingly free from the usual horror requirement to make the audience jump and instead unnerves us with subtly deployed CGI effects and wit. It's surprisingly funny, but for all the right reasons, and it's no surprise that the director Tomas Alfredson has made a number of other films - all comedies. A delicious (and bloody) treat then, both melancholy and touching - see it before the inevitable Hollywood remake.

The Damned United from the perspective of someone who hates sport

This blog post is about the film The Damned United. It is not a comparison with the book and it certainly won't explore the accuracy of the film's depiction of Brian Clough's life and career. I am afraid that before people started talking about the film I had never heard of Brian Clough, having avoided even David Peace's book because I knew it was about football. Plus, I was two years old in 1974, and it wasn't as if I remember the events from the first time around. 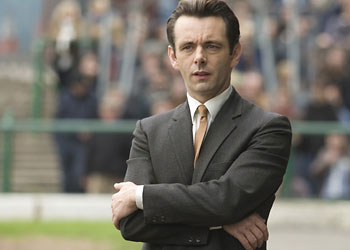 So it was with some trepidation that I went to see a biopic of a football manager, half expecting to be bored or baffled - instead I was thoroughly entertained. Most of the sports films I've seen follow the arc of a pair of star-crossed lovers, beginning in adversity but ending up happily ever after. The Damned United instead jumps back and forth between Brian Clough's remarkable success at Derby County and his difficult tenure at Leeds United. Clough's rise unfolds in parallel with his fall, both caused (it is suggested in the film), by the extent of his ambition. The calendar flips back and forth in a device that could have been irritating or confusing but fortunately works well.

With little actual football shown on screen, the story becomes about Brian Clough's rivalry with Don Revie, and his relationship with right-hand-man Peter Taylor. The performances are all excellent and the film is moving in its portrayal of these mens' preoccupation and dependency on each other. How pleasing to see a film set in the 1970s that doesn't wallow in period detail or musical nostalgia. It also doesn't matter whether or not you are familiar with the characters involved, the film assumes no prior knowledge and if it was full of in-jokes my enjoyment wasn't at all damaged by not getting them. You can watch an interview with Tom Hooper - the young British director of The Damned United, Longford and John Adams - which we uploaded on the website last month to accompany our item on HBO. With a production of Steinbeck's East of Eden going into production this year, we are likely to hear more about Tom Hooper very soon.

Ian Hislop - Sir John Soane's Museum from Creative Spaces on Vimeo. Nine museums and galleries around the UK are collaborating on a website called Creative Spaces, with the aim of allowing people to group items from collections together and...

Sad news of the death of one of the original members of the Funk Brothers, drummer Uriel Jones. We filmed part of our Culture Show Motown special at the end of last year with surviving members of the band and...

Does Alastair Campbell make you angry?

This week's New Statesman is guest-edited by Alastair Campbell, an event that has garnered the magazine more coverage than it has enjoyed in a long time. Responses in the press have been mixed, but largely positive, with praise from the...

When the details of this year's Manchester International Festival were published lots of things caught my eye: Elbow with the Halle Orchestra, Laurie Anderson performing with Lou Reed, but one event in particular leapt out - It Felt Like a...