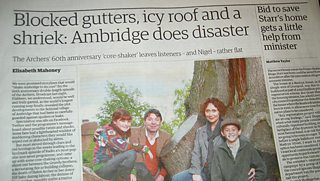 As you might expect, there's been strong press and media reaction to our 60th anniversary storyline. Here is a selection:

BBC News
Report Including a video tour of The Archers studio.

Daily Express
Report and review by Simon Edge
'...after an emergency caesarean section, mother and baby turned out fine. A nation wept...'

Daily Mail
Including a review by A N Wilson
'...The half-hour extended episode of the world's longest-running soap opera was a masterpiece of suspense...'

The Guardian
Article by Elizabeth Mahoney
'...it did include storylines that will slow-burn marvellously through village life...'

Keri Davies is an Archers scriptwriter and web producer

The Archers 60th - bits and pieces