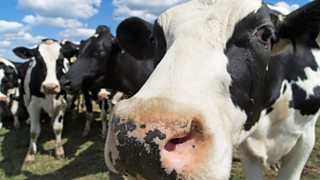 With the move to Northumberland getting ever closer, Pip Archer is currently carrying out a ‘hard sell’ of robotic milking to her slightly reluctant parents. The automated system – which allows dairy cows to come in for milking whenever they choose – is changing life on dairy farms up and down the country.

See robotic milking in action on a Lincolnshire farm (video)

It’s proving particularly popular with the tech-savvy generation of farmers less willing to spend unsocial hours each day working on their own in drafty milking parlours. The robot machines allow cows to set their own milking times. Attracted by the prospect of tasty food, they simply walk into the unit whenever it suits them and the robot does the rest.

As a cow enters, she is identified by a sensor which reads her individual, electronic identification tag. If she has been milked too recently, an automatic gate sends her straight out of the unit. If she’s due to be milked, automatic systems clean her teats, attach the teat cups, milk her and spray her udder at the end of the process. The whole operation takes place without the farmer or herd manager having to be present.

As Pip points out, the chief advantage of the system is that farmers are freed from the rigid schedule of twice-daily milking. They no longer have to get up in the early hours every day of the year to milk the cows. The automated milking itself is more consistent than it would be if human beings were doing the job. This is especially true if different people are doing the milking.

When the cows themselves choose when to be milked, they often opt for more than the usual twice-daily routine. With robotic systems, milking frequency can be as high as three times a day, though the average is 2.5 times daily. This can result in increased comfort for the cow because there will be less strain on the udder. For the farmer, it may well mean an increase in milk yield.

Not all dairy farmers are convinced by these arguments. They counter that robotic milking units are generally expensive. Even allowing for the increased milk yields, it can take a long time for the extra income to pay for the capital costs.

Then there’s the less tangible issue of the farmer’s relationship with his animals. Farmers like David and Ruth have milked cows for most of their working lives. They value the chance this daily routine gives them to closely observe their animals. When one of them is sick, it’s quickly spotted so that remedial action can be taken.

To offset this, robotic milking systems collect a great deal of data on the herd. Electronic sensors gather information on milk temperature, conductivity and  colour, changes in milking speed, the times cows are milked, their body weights and their movements. There are also sensors to detect changes in the milk due to infection.

Some farmers – David among them – aren’t totally convinced that a mass of data flowing onto their laptop computers compensate for the loss of contact with their cows. They may not always relish getting up at 5.30am to milk cows on a cold winter’s day. But, as they see it, it’s a necessary part of the job.

Whatever the outcome of the Archer family discussions, one thing is certain. Robotic milking is here to stay on many of Britain’s dairy farms.

Learn more about Pip, David and Ruth – and the actors who play them – in our Who’s Who

Ed, Emma and Will