What is a quarter peal? 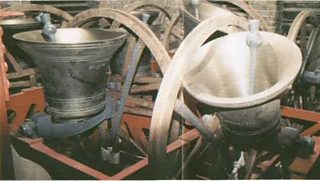 This Sunday (23 Jan), the bells of St Stephen's Ambridge will ring a 'quarter peal' in memory of departed bell ringer Nigel Pargetter.

Quarter peals are rung for many reasons: special events, birthdays, weddings or in remembrance of someone, as today. Some churches who are able to muster the requisite number of ringers may ring quarters for the normal Sunday services. But whether for normal services, or for something special, a quarter peal gives each ringer the chance to confirm their knowledge of a particular method, thereby extending their ability and enjoying a sense of achievement.

To explain what a quarter peal is, one needs to know a bit about 'method ringing'. Method ringing is a form of 'change ringing' - which is the practice of ringing a series of mathematical permutations on tuned bells, rather than a melody.

In method ringing the ringers are guided through each set of changes by following a specific pattern (or order), called a method. The practice originated in England and is still popular for both church bell ringing and handbells.

Let's take the eight bells hanging in the church at St Stephen's in Ambridge. The highest in pitch is known as the treble and the lowest the tenor. The bells are referred to by number, with the treble being number 1 and the tenor being number 8.

The most simple way of using the bells is to ring in 'rounds,' which means ringing the bells in sequence from treble to tenor - ie 1,2,3,4,5,6,7,8 1,2,3,4,5,6,7,8. This sounds like a descending scale. The order of the eight can 'change' to a different permutation, depending on the method being rung.

This is probably the origin for the phrase 'ringing the changes'.

There are hundreds of different methods. Each one has a different mathematical pattern and a different name, some of them being linked to the person who devised the method eg Stedman Triples, or named after places eg Yorkshire or Rutland.

Whether ringing a peal or quarter peal, the ringers must start the method in rounds. The conductor will then call out the method to be rung. A full peal on eight bells must last at least 5000 different changes. A performance of 1250 changes on 8 bells makes a quarter peal. A peal might take about three hours to ring, and a quarter peal 45 minutes.

Ringing is great fun. If you are interested in learning how to do it, do contact your local church. They probably have a keen band of ringers who would welcome you with open arms.

Rosemary Watts is a producer on The Archers - and a keen bell ringer.