If you think your offspring is not involved in sexting, think again. That is clearly the message from a new survey that reveals the habit is becoming more and more common among teenagers. 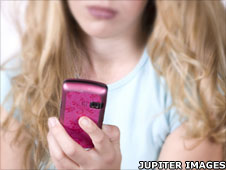 Sexting is, as Wikipedia puts it, a "portmanteau of sex and texting." Or if you like, it is the act of sending sexually explicit messages or photos electronically mainly from one cellphone to another.

The Pew Research Centre carried out a study in September involving 800 teens.

It found that 30% of 17-year-olds who have phones have received sexting photos or messages. Eight per cent say they sent such images.

In the 12-17 age bracket the numbers may not be as high, but it is startling to think of youngsters this age involved in such practices.

Four per cent with a mobile phone have sent sexually suggestive nude or nearly nude images of themselves via text and 15% say they have been on the end of receiving such material.

"It's an issue that teens grapple with and deal with in their lives, and one that deserves attention," said Amanda Lenhart, the Pew senior research specialist behind the "Teens and Sexting" report.

The problem has also caught the attention of lawmakers who are struggling with how to deal with a worrisome trend which also resulted in at least two teen suicides in the past 18 months.

The National Conference of State Legislatures has said that six states have passed laws aimed at sexting. Another five or so tried and failed and yesterday members of the Virigina State Crime Commission refused to recommend legislation involving sexting.

In California, there is a slightly different twist to the issue with the supreme court taking on a so-called landmark case involving a police officer and text messages discovered on an official police department pager.

At issue here is the same one of privacy but also what rights an employer has to read texts on a company provided device.

It certainly seems that the problem is taking on a life of its own and that while it may seem like a harmless activity among some young people, it has to be remembered that those convicted of sexting could end up becoming registered as a sex offender.

That is what happened to Phillip Alpert.

When he was 18-years-old he had an argument with his 16-year-old girlfriend and in anger forwarded a nude photo of her to their friends and family.

He was prosecuted and found guilty of sending out child pornography. Mr Alpert is now a registered sex offender.

On the issue of technology, the Pew's Ms Lenhart noted:

"The cell phone is such a vital part of these teens' lives that it isn't surprising that it's a major source of content for them - both positive content and content that's more worrisome."

Those numbers concern Parry Aftab, the executive director of WiredSafety.org who told MSNBC.com "It's not 'that kid' who's doing it, it's your kid," she said.

"If your kid hasn't taken a (suggestive) picture and shared it with somebody else, in all likelihood they've seen one, they may have possession of one or they may be sending them around."

Education among teens is seen as one possible solution. Recently James Lipton, the host of Inside the Actors Studio, has had a starring role in a series of public service adverts aimed at getting teens to stop sexting.

It is clear that in this digital age the rules are very different and young and old alike are learning the consequences of putting so much of themselves out there for others to discover.