No, me neither, and I have to confess that I had some trouble finding them when I set out to look. And I'm by no means unusual.

In a conference call with the company, I asked how many had actually bothered to adjust those settings before this week's initiative asking them to do so. Between 15 and 20% was the answer. 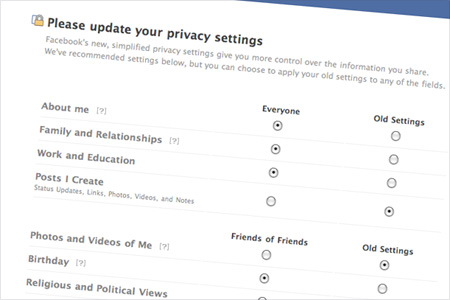 So for the vast majority of Facebookers the enforced visit to their privacy settings imposed by the company in the last 24 hours will have proved a novel experience.

Facebook says it has acted to give everyone more control over how they share their information, and made it simpler too.

One key change is that big geographical networks - like London or Australia - are going. Once Facebook moved off the campus, they provided many new users with their starting point but they've become far too big and have led to privacy gaffes, including one notorious incident.

Earlier this year a woman shared photos of her husband in his swimming trunks and the location of their flat with the six million people on Facebook's London network. Which might have been OK had she not been the wife of the incoming head of MI6.

From now on there are three basic privacy settings - you can share with friends, friends of friends, or everyone, which means the whole of the internet.

There is also a custom option but that's only likely to be used by people who've already fiddled with their settings.

While you do get to choose, Facebook makes recommendations for how many people you should allow to see each category of information.

So for instance it says you should allow your status updates and some basic personal information to be seen by everyone, while your photos should be restricted to friends of friends, and your address just to friends.

"As far as I see it, profile pic, friend lists, pages - and a few other 'insignificant' details, ie, status & sexuality are now on view to EVERYONE - and I've not found away to hide these, other than by deleting the information from your actual profile."

This did not please my friend. "I'm a teacher & we're supposed to hide our profiles from current students."

Facebook told me it was too simplistic to say that users were now being encouraged to be less private, but did admit "we believe users will feel comfortable sharing more" and conceded that Twitter - or rather what it described as "services for people wishing to share with a wider audience" - had made an impact.

What is clear is that users of social networks are now splitting into two camps - what I would call the broadcasters and the whisperers.

The broadcasters see social networking as a very public medium, somewhere to get their message across to as many people as possible, whether it's their rage at the fact that the 07:53 from West Wittering is late again, their support for an X Factor contestant or their views on the government's pre-Budget report.

The whisperers still see the networks as private places, where they can communicate with close friends without their employers, their mums and dads, or any curious passer-by listening in.

While there's no real point in being on Twitter if you're not prepared to "broadcast", it seems Facebook wants to be in both camps.

But will it really be possible to cater for everyone, from the most public users to those seeking just a private conversation with friends? I'm not sure.

You may not be surprised to hear that I put myself firmly in the broadcasting category. I quickly realised that Facebook was not a private place so that it was best not to put anything there that I didn't want the world to see.

In any case, I now spend far more of my time on Twitter, where there's even more danger of letting slip something private, but at least everyone is clear that it's a public space.

Oh, and if you want to keep track of my social networking gaffes you can follow me at twitter.com/ruskin147.