Wikipedia on the wane?

Will the online encyclopaedia that has become the first destination for millions of web users searching information end up withering away, as its worker bees lose interest in keeping it nourished? That's the question raised by a study of Wikipedia editors carried out by a Spanish academic for the Wall Street Journal. It shows that editors are giving up on Wikipedia far faster than new ones are joining, with a net loss of 49,000 editors in the first three months of 2009.

So why are so many of the people who used to compete fiercely to perfect entries on everything from astrophysics to Abba walking away from the project. One theory is that the whole project has simply lost its early innocence, and that's caused editors to drift away. It was incredibly easy in the early years to plunge in and write a new entry - or more likely edit an existing one. That allowed Wikipedia to grow very rapidly into an extremely broad-ranging source of information, and one that was mostly reliable, despite the carping of academics, rivals and many in the mainstream media.

But gradually the utopian idea of a worldwide community of unpaid enthusiasts creating an invaluable resource, making the world's information available freely to anyone with an internet connection, has had to confront a nasty reality - the web is an argumentative place where a few noisy and sometimes malicious folks can spoil things for everyone. 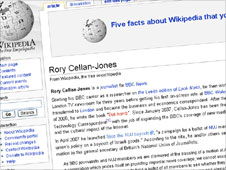 Repeated vandalism of controversial entries - and here I must confess I once tinkered with my own entry to make a journalistic point - has led the Wikimedia Foundation gradually to introduce more and more rules about the way articles are edited. It's clear some early enthusiasts have been put off by the increasing bureaucracy surrounding the project. Just look at the comments on this issue which I've gathered this morning from some "Wikipedians":

"I find the bureaucracy of Wikipedia really offputting. Little things like their policy on phonetic transcription are suffocating!"

"i stopped editing Wiki when every edit seemed to be hit a wall. it's just become too hard work to stay within the rules."

"combination of idiots constantly changing and disagreeing and how everything you write being screened.."

"The Deletionists took our encyclopedia away."

Mind you, some also questioned the source of these statistics and how they'd been interpreted (a very Wikipedian response!) and others made the very good point that with so much of the world's knowledge already included in the online encyclopaedia there was little to inspire new editors.

This morning I spoke to Michael Peel, who chairs Wikimedia UK, and he admitted there was a problem with communicating the rules to new volunteers:

"One thing we're finding is that people are scared off because they get a standard message (when they try to edit an entry) which is not written as well as it could be."

He said the Wikimedia Foundation was in the middle of a big project to make the site more user-friendly for both readers and editors.

Michael, who is a postgraduate astronomy student and contributes to articles on that subject and on the history of Manchester, says there is still plenty of work to be done:

"It's nowhere near what it could be. In my opinion, it could be a lot bigger, a lot more reliable and a lot better referenced, but that kind of job doesn't appeal to the passer-by."

Even if it does become more difficult to get people interested in contributing to Wikipedia, there's no doubt that user numbers just keep on growing. Wikipedia itself reckons between 28% and 37% of the UK internet population are regular users, with similar figures across much of Europe, North America and Asia - though only 1% of Chinese surfers apparently use Wikipedia.

So this is a project that is suffering plenty of growing pains - but with a Wikipedia entry coming top of Google's search results for just about any topic you can imagine, the online encyclopaedia is certainly not on the wane.