It's the biggest games launch of the year, possibly of all time, a title which is expected to sell 3 million copies in the UK alone over the coming days. It's the subject of feverish interest from fans, and great expectations from retailers, with stores opening at midnight, and a price war launched by one major supermarket chain. But Call of Duty Modern Warfare 2 has also sparked off a battle between two prominent Labour MPs with very different views of digital culture. 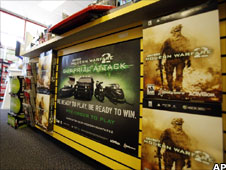 It started this morning with a story in the Daily Mail about the violence in the 18-rated game. The Mail said critics had accused the creators Activision of being irresponsible - but the only critic named was Keith Vaz, the Labour MP for Leicester East, who said this: "I am absolutely shocked by the level of violence in this game and am particularly concerned about how realistic the game itself looks."

Mr Vaz has been a long-term critic of the games industry, and plans to raise his concerns over Call of Duty in the Commons this afternoon in questions to the culture secretary and his team.

But within hours another Labour MP Tom Watson had hit back. Mr Watson is the former minister for digital engagement, and a prolific blogger and social networker who has shown a willingness to go on the attack over issues like cutting off illegal filesharers since he left the government in April.

He had already shown his impatience with critics of video games and this morning started a Facebook group, Gamers' Voice. The mission statement on the group's page says: "Are you sick of UK newspapers and (my fellow) politicians beating up on gaming? So am I. The truth is, UK gamers need their own pressure group. I want to help you start one up."

I got hold of Tom Watson and he told me that this morning's article had "pushed me over the edge". He said that the voice of ordinary games wasn't being heard:

"Everything that comes out of Parliament in relation to video games is relentlessly negative. There are thousands of people employed in this industry, there are 26 million people playing games. We should have a much more balanced view of the industry, indeed we should be supporting them through difficult times."

Keith Vaz's concern is about one particular level of the game, which involves the gamer deciding whether to kill unarmed civilians. I contacted Activision, and a spokesman pointed out that players encounter a mandatory "checkpoint" before this segment of the game, warning that it contains disturbing elements.

Tom Watson says the content in question is "deeply repulsive" and he would not want to play it himself - but he points out that similar material is in both books and films, and he believes that as long as there is a classification system which is well policed, there is not really an issue here.

Keith Vaz told me he was concerned by the way the manufacturers of the game were glorifying violence.

"Nobody is trying to stop anyone over the age of 18 purchasing this game," he said. But he said government, manufacturers, retailers and parents all had a responsibility to work together to protect children.

He already has a question listed for this afternoon about the steps taken by the government to implement the recommendations of the Byron Report on the classification of video games, and he will follow up with a supplementary about Call of Duty.

But Tom Watson is planning to hit back with his own views on the gaming industry. That's DCMS at 1430, and you can follow this bout of modern warfare on the BBC Democracy Live website - and maybe report back here on your verdict.