Reading the coverage over the last couple of days, you might think that the row over Google's plans to digitise the world's books was fading away. 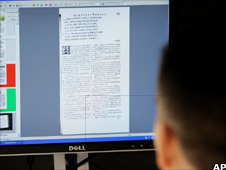 The search company has responded to the anger of many in the publishing world by making concessions late last week which mean that most non-American titles will not be included. "Google backtracks on putting world's books online," read one headline today.

But actually it's a lot more complicated than that, as I discovered in the genteel surroundings of the Society of Authors in Kensington this lunchtime.

Representatives of publishers and authors in the US and UK had called a few journalists together to explain some of the details of this extraordinarily complex deal.

After an hour I think I might just about have got to grips with it - but let's boil it down to a few headlines.

• The deal envisages the digitisation of millions of out-of-print works that are in libraries in the United States.

• The number of books involved has now come down by 60%, following the decision to exclude most foreign language books.

• But books by UK, Australian and Canadian authors held in US libraries will be part of the programme, unless the authors or publishers opt out.

• Google users outside the United States will not have access to the service.

What was clear from the meeting was that the bodies representing US and UK authors and publishers are united in the belief that the deal is now satisfactory and should go through.

The Authors' Licensing and Collecting Society, which collects fees for writers, says it has received around 2,000 positive e-mails from its members, with only four or five opposed to the settlement.

But, I asked how could they all be so sanguine about the prospect of giving Google a foothold in online publishing which might eventually make an already powerful company the dominant force in the future of books?

They insisted that a deal involving out-of-print titles, a sector of the market which was by definition unprofitable, would not set a precedent: "Nobody expects the settlement to be the mechanism to make in-print books available to the general public," said Paul Aiken of the US Authors Guild.

He then picked up his copy of Amazon's e-book the Kindle to make the point that monopoly power currently resided elsewhere:

"Amazon has 90% of the e-book market in the United States, and 75% of the online print book market - Google has roughly 0%. Google entering the market for out-of-print books just isn't going to change the equation."

Simon Juden of the UK Publishers said that he and his colleagues across Europe were working on Arrow, an EU-funded system for putting out-of-print books online, which would be "much more platform-neutral".

Why, then, had his organisation backed this system which was so far from being neutral? "We sit where we sit," he replied, "to get where we are we started with a court action in 2005. In the real world, this is just where we are."

And one other thing is very clear - this story will have many more chapters. Even if the current settlement finally gets the approval of the US court, it may not come into force for some years.

"There are implacable opponents with money and they will appeal it," said the man from the US Publishers Association. So, who knows, perhaps a European online book platform could be up and running while Google's version remains trapped inside the American legal system.