Readers rejoice - the revolution is here at last. The digital earthquake that shook the music business really began to make itself felt with the arrival of the iPod. Now a slightly larger rectangular white object threatens to do the same to the publishing and newspaper industries. The Amazon Kindle has left its US home and is going global.


Actually, hold on a minute, let's all calm down. After trying out a Kindle over the weekend I'm not convinced it's quite the threat or the salvation which many across the printed media fear or hope it might be.

What does immediately impress is the simplicity and stylishness of the device. Plug it in, charge it, download your first book and you're away. Then subscribe to a digital edition of a newspaper and it is wired to you in the morning, via the Kindle's "whispernet" 3g connection. Just as the iPod was not the first MP3 player, the Kindle is by no means the first digital reader. I've also had a quick play with the Sony Reader, which in its Touch edition is also quite an impressive device.

But the Kindle's integration with the Amazon store is what gives it the edge, while setting off alarm bells in the publishing world. Amazon must be looking at the Apple example, with iPod users herded efficiently to the iTunes store, and hoping that its own integrated system will make it as powerful in digital text as the computer company is in digital music. Which is why the analogue text industries are in a frenzy of fear and anticipation.

Before using the Kindle, I had imagined that it was the newspaper subscriptions rather than the books which would prove the more attractive. But the opposite turned out to be true. There seems to be a pretty good range of e-books in Amazon's store, with a few big hits very competitively priced, and others rather expensive for a 'virtual' product. I bought one of the hits, the Booker prizewinner Wolf Hall, for $8.84. I should explain that Amazon is still running the whole Kindle operation through its US site, which means you pay in dollars - so the Hilary Mantel book cost me about £5.40. 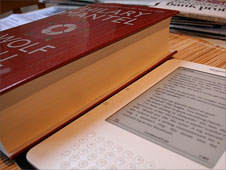 When I started reading, it felt pretty close to the paper experience. There's no glare on the Kindle's screen, so you get simple black text on a cream background, with just enough added bells and whistles. You can make digital notes, search the text, and, if you fall asleep with the book on your face as is my wont, it will remember which page you were on when you turn it on again.

Having also splashed out £14 on the hardback version, I was surprised to find the Kindle Wolf Hall an easier read - although that may be largely due to the fact that the device weighs a mere 400g,and lugging the 1kg book around is a far more back-breaking business. What you don't get is the swappability of a printed book - I'm hardly going to lend the Kindle to a friend so they can read Wolf Hall - nor, as my wife pointed out, do you get your room furnished with attractive book spines.

Then I turned to the digital newspapers. The Kindle Store offers 51 titles from around the world, including four UK papers - The Times, the Daily Mail, the Independent and the Daily Telegraph. They each cost $22.99 per month - about £14. I signed up for trial 14-day subscriptions to the Times and the Telegraph. And was immediately disappointed. You head to the Kindle's home page, click on your chosen newspaper and are presented with a wall of text which is the front page lead story. Struggling to work out what I wanted to read, I found a sections list - Sport, Business, International - but this very dull shop window had no clue as to the precise nature of the goodies within. It all made the idea of reading the paper on the Kindle a very un-enticing prospect. 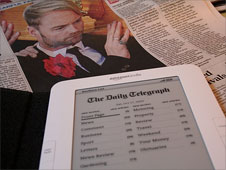 Suddenly I realised why a book worked on the Kindle but a paper did not. For me, reading a book is an analogue experience - I start at page one and continue until I've finished. A newspaper, on the other hand, is more random, more interactive. I scan the sections and leap from one article to another, much as I do on the web. That's what is already available to me - for free - on newspaper websites, so why would I pay for a less satisfactory digital newspaper? Newspapers have woken up rather late to the fact that they've been giving away content online which could be monetised through e-readers.

There are other reasons why the Kindle may not be quite the game-changer some are claiming. Is a device costing upwards of £200 really going to persuade many people to abandon paper for a screen - especially when you can get a netbook these days for around the same price?

And there will be questions about Amazon's walled garden, which allows some other e-books to be read on the Kindle but doesn't allow titles from its online store to be read on other devices. Other contenders - perhaps including an Apple tablet - may learn some lessons from Amazon and take digital reading to the next level.

The Kindle looks to me like an attractive but expensive niche product, giving a few techie bibliophiles the chance to take more books on holiday without incurring excess baggage charges. But will it force thousands of bookshops to close and transform the economics of struggling newspapers? Don't bet on it.