Last week, I promised to kick the tyres of Google's shiny new collaborative communications tool Wave - and to let you know how it looked.

Well, sorry for the delay - but it took days for the invitations I'd sent to friends and colleagues to arrive and without anyone to talk to, Wave is, well, pointless. But now that my colleague Jonathan Fildes and technology journalist Bill Thompson have arrived in what we might call the Wave community, I'm sitting ready at my machine and we can see how it might work - if they'd only heed my appeal to come and join me. 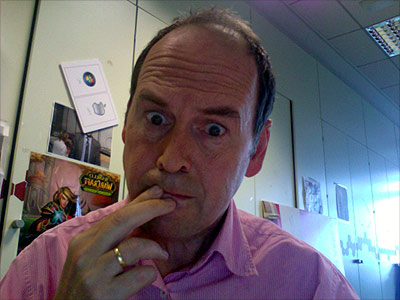 As you can see, I've worked out how to add a picture to the Wave - but I'm still slightly puzzled as to what to do next.

Ah, Bill Thompson has arrived and has also found out that you just drag a photo into the Wave. He's added a giraffe.

Another day has passed - and finally, Jonathan Fildes is on board. And here is his first observation:

JF: "As well as trying to reinvent e-mail and communications, it seems Google is also intent on reinventing the definition of a few words in Wave.

"The system has its own lexicon. A Wave, for example, is a threaded conversation. It includes messages and updates from everyone invited to the Wave - which could just be one person or several, like we have here.

"It's a bit like an e-mail that has been sent backwards and forwards between a group of people, detailing every reply.

"But in the case of Wave, each reply is given its own section. Each of these messages - known as a Blip - can be edited and commented upon by other people. This then becomes a wavelet, a subsection of the wave.

"Following me so far?

"Great, then I'll leave extensions, robots and gadgets to my fellow Wavers.... or you could consult this handy graphic from Mashable's Wave Guide.

"Incidentally, I wrote that little section in Microsoft Word and then pasted it in. It seems that Wave doesn't like that approach."

Well, thank you Jonathan for that - I'm sure we're all a little bit wiser. And my goodness, we've got another collaborator joining our wave - welcome to Stephen Fry.

SF: "Bit of a learning curve, but I suppose that's the point. Flakiness to be expected. Elements of a server-side Yojimbo, if any of you use that.

"That weirdness was an attempt to drag a Photobooth file straight into this Wave. Didn't work." 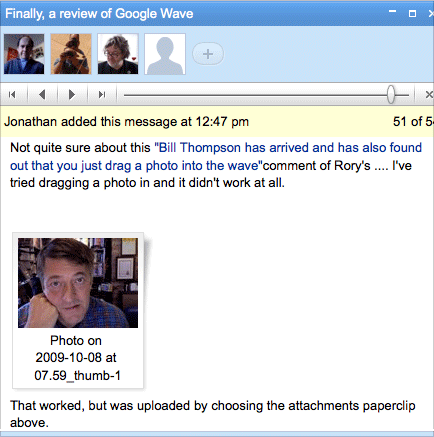 "Most weird. I just dragged a movie file into this blip and got a black screen which played the movie. But the only way back to Wave was pressing the back button. I'm probably being immeasurably stupid...

"Weirdness upon weirdness. Strange Japanese or Korean script is appearing and disappearing and some text appears to be randomly yellow highlighted. Perhaps we've been botted. I shall tiptoe away before I do any more damage." 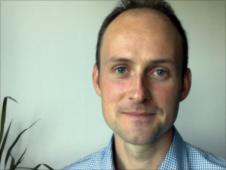 Bye, Stephen, I'm sure it's not your fault. Nearly time to wrap up. Oh, just a minute, Jonathan Fildes - who's at home waiting for his first child to be born - has had time to chip in with this:

JF: "....very little of what Wave does is new. It just brings lots of different applications together into one place, swirls them around and dumps them on the beach. It has a little bit of IM, a little bit of e-mail and a smattering of Zoho or etherpad.

"All of these are "pure" applications - they have a very clear use and you know what you're getting and how to use them.

"With Wave, the picture is more confused. As one Waver said to me: 'I remain baffled.'"

Well, I'm not entirely sure that our attempt to use Google Wave to review Google Wave has been a stunning success. But I've learned a few lessons.

• First of all, if you're using it to work together on a single document, then a strong leader (backed by a decent sub-editor, adds Fildes) has to take charge of the Wave, otherwise chaos ensues. And that's me - so like it or lump it, fellow Wavers.

• Second, we saw a lot of bugs that still need fixing, and no very clear guide as to how to do so. For instance, there is an "upload files" option which will be vital for people wanting to work on a presentation or similar large document, but the button is greyed out and doesn't seem to work.

• Third, if Wave is really going to revolutionise the way we communicate, it's going to have to be integrated with other tools like e-mail and social networks. I'd like to tell my fellow Wavers that we are nearly done and ready to roll with this review - but they're not online in Wave right now, so they can't hear me.

• And finally, if such a determined - and organised - clutch of geeks and hacks struggle to turn their ripples and wavelets into one impressive giant roller, this revolution is going to struggle to capture the imagination of the masses.

Actually, I had thought that we were finished - but I see that Stephen is butting back in to agree.

SF: "Yes it's preview, (even when it comes out of preview you can bet your gmail it'll be in beta), yes it's new and therefore pardonably glitch-ridden and prone to hanging, but for the moment it's quite hard to see exactly how this contrivance of bolted on gadgets, widgets and tools quite adds up to a new wave of collaborative software.

"A major worry must be the spectre of rogue Blip-bots roaming the world wide wave, attaching themselves to public waves (public waves being one of the service's Unique Selling Points), worming their way into systems. It seems like one of those Imperial Stalkers in Star Wars - mighty impressive, but quickly made to look clumsy and far too easy to bring crashing down.

"No doubt I'm wrong, but that's my first impression."

Right. Now we really are finished. I think.