Broadband Britain - how far down the league?

Where is Britain in the global broadband league? Either 25th or 31st, according to the rather confusing Oxford/Cisco Broadband Quality Study, published today.

We've gone with 25th, which already seems just a little embarrassing for a country in the G8 group of nations - but a number of people have contacted us to say that the situation is even worse, with Britain back in 31st place, behind the likes of Iceland and Greece.

I think I now understand what's going on. The broadband quality table in the study uses data collected from speedtest.net in 66 countries, and measures download and upload speeds, and latency. By those measures, the UK, with an average download speed of 4.6Mbps and uploads at 0.5Mbps, is indeed down in 31st place.

But the researchers then add in a measure of broadband penetration to come up with their broadband leadership league. The fact that uptake and availability in the UK are both high pushes us up to 25th place in that table. I've been in contact with Cisco, which funded the study, and they've given me these two formulae to explain how the scores were calculated:

Fine, that's clear enough, so why are we so low down the league? The answer, it seems is simple - fibre and cable. Britain has done well in the first broadband wave, using a pretty efficient copper network and DSL technology to get homes across most of the country connected. But other countries are moving forward more rapidly to build next generation networks using cable and fibre-optics.

So let's compare the UK with Sweden, which came fourth in the broadband leadership table. Its download speeds averaged 15mbps - but what really pushed it up the league were uploads speeds of 5mbps, 10 times those in Britain. While Sweden still relies on DSL for 60% of its connections, nearly 40% are now supplied by fibre and cable networks. 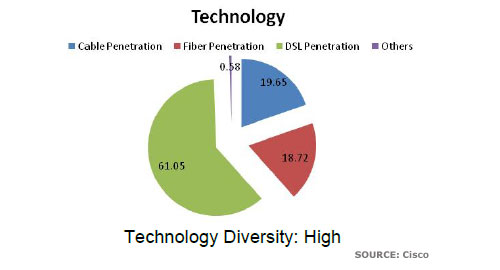 The UK, by contrast, relies on standard phone lines with DSL for 79% of connections, with the rest coming from cable, and no fibre yet deployed. 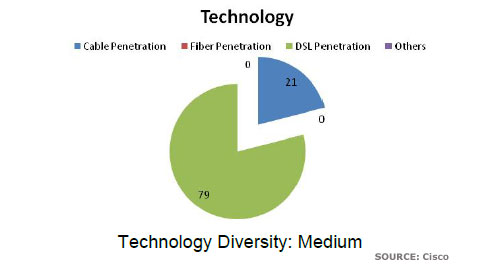 Now while there has been plenty of wailing and gnashing of teeth in the UK at this relatively poor performance, the report's authors were keen to cheer us up. They congratulated Britain for a 40% improvement in broadband quality in the last year - and pointed to Virgin Media's investment in high speed broadband via cable as evidence that the nation was not standing still. They also said our broadband speeds were suitable for today's applications, though we'd need to invest for tomorrow's needs.

And it's fair to say that other studies are much more positive about the UK's performance, notably the European Commission's Broadband Performance Index[76KB PDF], which puts us in fourth place, behind Sweden, the Netherlands and Denmark.

But compared to South Korea, where 97% of homes are connected and where the government has said it wants speeds of 1gb/s by 2012, we're certainly nowhere near competing with the world's broadband speed merchants.