Who will ride Google's Wave?

Earlier this week, I spent an hour inside Google's London headquarters chatting to two developers, swapping photos, editing documents - and playing a bit of sudoku. What was unusual was that Lars Rasmussen and Stephanie Hannon were joining the conversation from Sydney in Australia.

That is where the Google Wave development team is based and they were demonstrating the search firm's hottest new application, which is now being made available to around 100,000 trial users.

I knew that Wave was a collaborative tool that had caused a great deal of excitement when it was demonstrated at a Google developers conference in May. But it took me some time to puzzle out what makes it really different - and, despite its sheer cleverness, I'm still not entirely sure that it will take off.


Lars and Stephanie started the demo by launching a "wave" - much like starting a conversation - and inviting me to join (I was using the login of a London-based Googler). Then we began exchanging messages - rather as you would in any instant messaging application. The only difference seemed to be that we each could see what the others were writing even before they had sent their messages, which meant that even before I had completed "how is the weather in Sydney?", Lars was typing back that it was sunny.

When I suggested that this appeared to be little more than a combination of e-mail and instant messaging on steroids, they said that was not a bad description but there was a lot more. Collaborative editing, for instance, which allows you to alter documents or messages sent by others in the wave, as well as your own. Then there is the ability to post photos into the wave and let others share them, or edit them. But it's also a new platform open to developers - Lars and Stephanie showed me a sudoku game, which is one of a number of Wave plugins already available, even before the launch.

They described a few user cases - you might want to plan a trip, swapping maps, editing schedules, and then posting photos to the wave afterwards. Or perhaps you might be working with a team on a major report for your employer, using Wave to write, discuss and edit the document.

But surely the kind of people who want to plan a trip together will use the likes of Facebook to do that? And there are already tools which let colleagues collaborate on work projects. I use Google Docs, although I often find it difficult to persuade others to join up - they usually prefer to have the document e-mailed to them.

And that's the big question: will Google Wave achieve the network effect it needs to be a real winner? 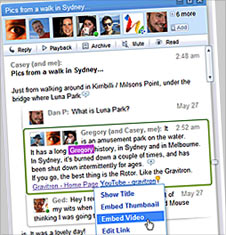 I can see that it's a useful way of bringing together the best aspects of e-mail, instant messaging and social networking sites in one browser-based application. It's been developed by people for whom it is natural to collaborate online - but is there a critical mass of users like that out there?

I asked a friend who often works on big reports with a team of people scattered around the world whether Google Wave might be the answer for her.

Right now, she tends to e-mail reports in Microsoft Word format, back and forth, with changes clearly visible simply by the date-stamp on each version. She had immediate questions about Wave.

For example, could one person be in charge of editing? And could you work offline, so that you could read your Wave document on, say, a plane and then upload the changes when you landed?

Google says that there is a playback function which allows you to remove or edit contributions, and it's working on an offline version. My friend still seemed dubious, and she's reasonably open-minded - so maybe getting the network effect going will prove a challenge.

It's worth remembering too that not every Google product is a winner - for every Gmail, there's a Google Answers languishing in the outer reaches of cyberspace. Still, the proof of the pudding will be in what those 100,000 test users find to do with their waves. I hope to be among them, so will report back when I've given the tyres a good kicking.