What makes a tech story?

If the coverage of technology on this website and across the BBC seems a little thin today, sorry, but there is an explanation.

The team behind that coverage is on an awayday (in a BBC office rather than a country house hotel you'll be glad to hear - and there aren't even any biscuits). 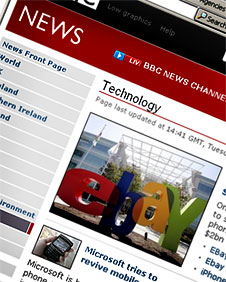 But we are discussing something rather important - what direction should our technology coverage take?

We started with a "vigorous" discussion on what makes a tech story, with plenty of healthy disagreement.

Should we, for example, cover product launches like Apple's iPhone or a new Sony PS3?

Some felt they had no place on the BBC, others pointed out that some launches marked a sea-change in technology and were worth covering.

What about financial stories, such as Microsoft's attempts to take over Yahoo - or plunging share prices of leading technology firms?

Let's leave them to the Business team, some argued - while others felt that our readers and viewers wanted to know how tech firms were faring financially, as well as what products they were launching.

And there was quite a punch-up over video games - with one group arguing that coverage of games and gaming culture was a vital part of any technology coverage, whereas others felt this was an area that should be in the entertainment section.

Oh, and I think we now all agree - stories about Twitter need to be pretty startling to justify their presence on this site or on the airwaves.

Then we heard an interesting take on all this from an outsider, the technology editor of a major newspaper.

He started by relating one of the many quotes about what news is:

"[N]ews is stuff I care about, and stuff I want to pass on".

Then he set to work to categorise our coverage under four headings, with only the fourth really meeting with his approval:

• Security scare stories, about viruses, malware, phishing etc.
Frightening people but not giving them enough information about what to do.

• Gee-whizz stories - "in five years time you"ll all have personal jet- packs" - which often give misleading impressions of how much technology can deliver.

• "Something should be done" stories - covering petitions for Alan Turing to be honoured or Bletchley Park to be saved.

• Really useful stories, which tell readers something they didn't know. Gratifyingly, he gave as an example our revelations about Spinvox.

Now that is undoubtedly an outrageous misrepresentation of our coverage by a jealous rival. Ahem.

We set to work to tell him about the valuable stories that he'd ignored in his parody of our fine journalism - the ton of advice about staying safe online, the gee-whizz story about new barcode technology which proved hugely popular among readers, the wealth of information about Bletchley Park and the history of computing in Britain, which we see as a valuable contribution to public knowledge.

But maybe, just maybe, he had a point. Perhaps we are a bit too scattergun in our coverage of technology and need to focus more on where we can deliver some added value.

My personal view is that we should aim to deliver useful - but not excessively specialist - information to as wide an audience as possible.

But when I suggested that we should not be too geeky (mainly because I lack the geek credentials of some of my colleagues), others countered that it was important to serve niche audiences.

But what do we know? Let's hear your opinions about what makes an interesting technology story - and which ones should be covered by the BBC.