How much can you find out about a country in one afternoon? Not a lot - but spending half of it at the Ministry of Information can be quite an education.

We got into Rwanda's capital Kigali around lunchtime, and were immediately struck by the differences compared to Kenya.

Mombasa had been hot and humid, the pace of life seemed hectic, the roads chaotic and pot-holed, and the fabric of the town, apart from the tourist hotels and a few official buildings, seemed to be in a poor state of repair.

Kigali, by contrast, seemed rather like a quiet provincial town - the roads were good, the buildings well-maintained, the people appeared relaxed.

The climate, too, was more benign in this town spread out over a series of hills, refreshed by recent rains.

There's a difference too in the politics.

I'd been briefed by a number of Kenyans that whereas their country was an argumentative, flawed democracy, with a lot of corruption but also plenty of entrepreneurial flair, Rwanda these days was a "benign dictatorship", where things tended to get done, if the man in charged willed it to happen.

That man is President Paul Kagame and what he wants is for Rwanda to become the digital hub of East Africa. Roads have been dug up for fibre to be laid, technology firms from around the world have been recruited to help the country's digital ambitions and ordinary Rwandans have been told to shape up and get online.

But to make all that happen he has built a formidable bureaucracy - and one that captured us the minute we landed. To work as a journalist in Rwanda you need a permit from the government for which you pay $200 - about £130. 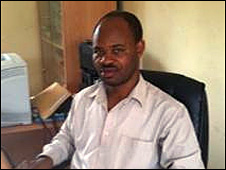 First, you go to one government department to hand over the money, then you head across town to the Ministry of Information to get the letter you need if you are to work.

There, as I found, you can wait quite a long time, but I spent it in the office of a man called Desire, who processes the applications and then takes them through for the minister herself to sign.

While I sat at the civil servant's desk, I leafed through a copy of the New Times, a Rwandan newspaper that tends to follow the government's line.

Once again, this was a bit of a contrast with the Kenyan press, which is full of lurid tales of violent crime and corruption.

Still, the New Times had some interesting material. There was a story about a scheme to give 35,000 mobile phones to farmers so that they can take part in a government scheme which will inform them about market prices for their crops. 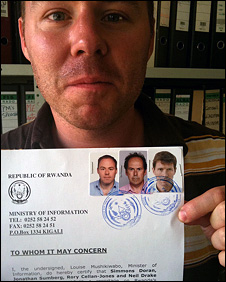 There was a clutch of statistics about Rwanda's economy - I learned that in 2007, the income per capita was $315, but the economy was growing at a rate of 16% per annum.

Best of all, there was this article about a new broadband cable about to go live in Kenya - lifted in its entirety from Adam Blenford's story on the BBC website, though they were good enough to give him a byline and to credit the BBC.

I teased my new friend Desire that as the BBC had contributed this article, the Rwandan government should let us film for free - he laughed a little nervously.

The paper finished, I whiled away more time recording an AudioBoo which you can also hear below. Finally, Desire returned from the Minister's office to hand over our accreditation to my ever-patient producer Jonathan Sumberg.

It looks impressive enough - let's hope it works as we're about to head out into the countryside to film an exciting new digital project.