Just when it seemed that everything was shaping up for a battle of the bands on the issue of illegal file-sharing, peace has broken out between musicians over the issue.

Previously, the likes of Lily Allen, Elton John and James Blunt were lining up to support the government's tougher stance, while artists like Billy Bragg and Radiohead's Ed O'Brien of the Featured Artists Coalition (FAC) were warning against alienating fans: it looked as though there was little hope for harmony. 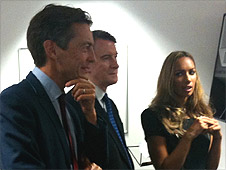 Yesterday afternoon, as he visited the Brit School for the Performing Arts in the company of the Culture Secretary Ben Bradshaw and Leona Lewis, Lord Mandelson was asked about the opposition to his plans from the FAC - which has argued that what's needed is more carrot and less stick.

He said that many more artists supported his proposals, which include temporary suspension of the internet accounts of repeat offenders, a measure he described as modest and fair:

"We can't see a situation where people are producing content without being compensated. We want to see talent protected and properly compensated."

Leona Lewis wasn't tempted to come to my microphone, but the BPI issued a statement with some comments from the star about how important it was "that people understand how copyright means that performers and writers can actually end up making a living out of their work", so it appeared she was in Peter and Lily's band rather than singing from the Radiohead hymn sheet.

Little common ground, then - but last night the Featured Artists Coalition held a meeting to hammer out a position on the whole issue. What emerged was a statement which first of all expressed the artists' support for Lily Allen and condemned the "vitriol" directed at her in recent days.

The FAC then went on to throw its weight behind a "three strikes and you're out" policy - not quite as draconian as the Mandelson disconnection plan, but a lot further than just about any country apart from France has gone in the battle against file sharers. This is a massive U-turn from an organisation which, a few weeks back, seemed to think that file-sharing might even be a good promotional tool for artists. 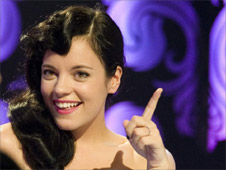 So it looks as though Lily Allen has made quite an impact, despite shutting down her It's Not Alright blog, and retiring bruised from the battle after a lot of unkind comments about her stance. One American music industry pundit, Bob Lefsetz, even questioned whether artists were bright enough to comment on this issue.

But Lily has had the last laugh - her fellow artists have united behind her, and she appears to have shifted the terms of the debate. And Lord Mandelson must be even more pleased this morning. The initial reaction to his toughening up of the Digital Britain proposals was pretty negative - but now he's assembled quite an impressive chorus of approval.

All he's got to do now is convince the internet service providers that they should be happy to police their customers - and that will prove rather more tricky. But look out for the New Year's Honours list - how does Dame Lily sound?