Hope out of Africa

I've spent the last few days in Rwanda - and I'm still trying to make sense of what I've seen. So here are a few snapshots. 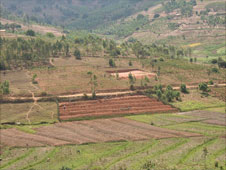 Driving through some of the most beautiful landscapes you'll find anywhere - lush, rolling hills, with terraced fields and farmers bending to tend their crops with ancient tools, rather as if we'd been transported back to 16th Century Tuscany.

A child carrying a heavy load of wood on his head down a dusty red road while behind him a luxury coach packed with spanking new laptops draws up to give a taste of the internet to a village which doesn't even have electricity.

The village choir gathering to practice a few yards away, a woman with a drum beating out a rhythm while the rest make a beautiful sound.

Peering down a manhole in the centre of Kigali to see the fibre-optic cable network which now stretches right across this country- while a crowd gathers and a man tries to interest me in one of the hard-boiled eggs he is selling.

A dusty schoolyard with children kicking a ball around - then inside to a classroom where each of the pupils is brandishing a small green and white laptop, and most are calling out to the teacher desperate to be the first to answer his question.

And finally, in the Kigali Memorial Centre, photos of children, with captions detailing their favourite foods and pastimes - and then details of exactly how they were murdered.

It's just 15 years since the genocide that left a million people dead and tore apart the fabric of Rwanda's society and economy. While the shadow of those terrible events still looms over this country, what's remarkable is how far it has come and how ambitious it is to go a lot further. 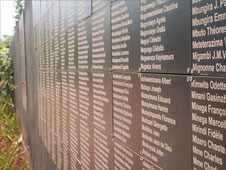 We saw what appeared to be a steely determination on the part of President Paul Kagame's administration to use technology to transform an agrarian economy into one based on the knowledge industries - in other words to move from the 18th century to the 21st century in a couple of decades.

So there's a rush to build that fibre network, plus a mobile phone network that would be ahead of anything yet in use in Europe, but the real priority is to train young Rwandans - and the majority of the population is under 20 - to compete for the kind of jobs that are currently done in places like Bangalore or Shanghai. That means pushing through schemes like the One Laptop Per Child project, sending far more Rwandans to college - even switching the official language from French to English to convince outsourcing firms that this country may be a location for call centres.

There is a darker side to this ambition - an impatience with dissent, and a pretty rigid control from the top. But one Rwandan civil servant told me the country just didn't have time to hang around and debate everything:

"If you're one of the G7 countries you have time. When you're close to the bottom and you're impatient to get up the ladder, you can't wait for everyone to jump on board."

But the real hope lies in the aspirations of the young. Just about everyone we met in Rwanda was under 35 - including a whole new breed of young technocrats, many of whose families appear to have returned home after 1994 to help rebuild the country. Then there are the schoolchildren who've already started to benefit from the ICT program.

So a few examples of the kind of people who might lead this country to a better future: 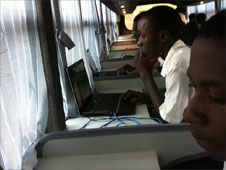 27-year-old Manzi Olivier, whose parents brought him home from Burundi in 1994, is now working on a mobile broadband project in Kigali after graduating from a South African university - he talked with engaging passion and optimism about his country's prospects; 17-year-old Alain climbed aboard the 'ICT bus' in the village - and was quickly checking his e-mail, logging on to Facebook and trying without much success to watch a Rihana video on YouTube; 13-year-old Pascaline from a poor district of Kigali, who had quickly become the best in the class at using her laptop and shyly told me that she wanted to become a doctor. And even the young man who haggled with me over the price of his masks and t-shirts at the craft market had put down a print-out of a computer course to sell his wares.

We all know how much bad news has come out of this continent over recent decades - and some of the worst emerged from Rwanda. There's no guarantee that a country which is still hugely dependent on foreign aid will achieve its ambition to become a high-tech knowledge economy. But let's hope that Rwanda can give us some good news from Africa.