What can music teach telly?

What can the television industry learn from the music business as it wakes up to the threat from file-sharing? 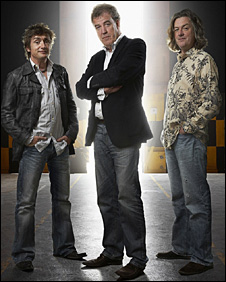 That's the subject of a session I'm chairing on Saturday at the Edinburgh Television Festival. A cynic who learned about this sent me this message:

"How to alienate its customers by treating them all as likely criminals."

But that's unfair to the people who are appearing on my panel.

Will Page, the economist at the Performing Right Society, is a big thinker about what the music industry has got right and wrong over recent years - and where it's heading.

Peter Jenner, legendary manager of Pink Floyd and former economics lecturer, is not a man to toe the music industry party line.

And Eric Garland of Big Champagne, the media measurement business, has some fascinating data about the patterns he's spotted in unauthorised online access to both music and video.

Chatting to all three in advance, I think they have a few simple lessons that both industries can learn about dealing with a digital world. 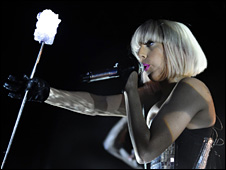 If you've got a popular product - whether it's Lady Gaga, Top Gear, or Heroes - it's going to be popular on all sorts of platforms. And that includes unauthorised places where fans go to share what they like.

Does that mean you end up earning less from legitimate outlets?

Maybe, though it's hard to get figures. But all that pirated material floating around and being talked about could also be seen as free marketing, sending paying customers your way.

They want it now!

Once your product becomes better known, consumers will want to get it straight away - so you had better make sure that they can get it legitimately before the bootleg version is available.

Look at U2's much-anticipated No Line On The Horizon, leaked online before its launch. Hundreds of thousands of fans got a free copy. Some saw that as clever viral marketing - but it looks as though it damaged sales.

And look at Eric Garland's data on Top Gear. It's a popular show in the United States, but there's a big gap between its broadcast in the UK and its arrival on BBC America. In the interim, impatient fans rush to torrent sites to find it. 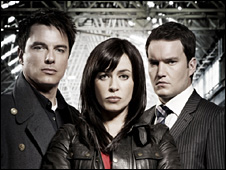 The BBC appears to be learning that lesson - the recent Torchwood series was broadcast in the US shortly after the UK saw it and fans of the cult series were able to get their fix.

The music business has switched its focus to live gigs, finding that fans who wouldn't pay £15 for a CD are happy to pay £50 or more to see their favourite band live - and to shell out more on merchandise.

And while Hollywood and the TV industry are looking in despair at the huge numbers downloading the likes of Heroes or Watchmen for free, the extent of piracy of live shows is relatively small.

Radiohead's "pay what you want" offer for their In Rainbows album is often cited as an example of advanced digital thinking - and the fact that most fans chose to pay very little is flung back by the cynics.

But Radiohead also managed to sell lots of CDs and got a lot of fans to hand over £40 for a deluxe edition of the album. Smart band.

Record labels, and television executives will realise that there are still plenty of ways of extracting cash from people who really want your product. Mind you, if it's rubbish, you will get found out very quickly.

There's something akin to panic in the boardrooms of TV firms and Hollywood studios.

They're convinced that the wave of internet piracy which has swamped the music business is now going to capsize them too.

But Eric Garland has a message for all those anxious executives: calm down, dears.

TV in particular has a range of business models - unlike music which was wholly dependent on selling circles of pressed plastic in high street stores.

Live television is still watched by millions for many hours each day - and that will continue to make it attractive for advertisers.

So instead of pulling their hair out, smart folks in TV will take a look at the music industry's experience and adapt rapidly to a changing world.