The new tech start-up: US government

Shortly after President Obama took office, he made a promise to make the default position for government open rather than secret. This is evident today in a host of websites already up and running and being dubbed as part of Government 2.0. Yes, think Web 2.0 but without the overarching social media obsession evident during the campaign. 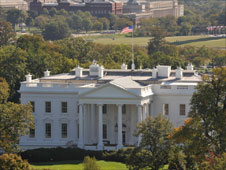 • USAspending.gov is "where Americans can see where their money goes."

• Recovery.gov shows where stimulus money is being spent and how.

• WhiteHouse.gov which is of course where citizens can find out what the occupants of 1600 Pennsylvania are up to.

All these websites contain a treasure trove of information, statistics and raw data, but what good is it all and what does all this mean?

Anil Dash from Six Apart, which is one of the most significant players in blogging, said what the government is doing represents the "most promising new start-up of 2009 (and) one of the least likely."

"I am not a Polyanna about this, " Mr Dash told me.

"I don't think necessarily everything that comes out of this will be immediately great. It will take people some time to understand the potential there is for something great to happen.

"In the past, when this information was printed on paper and stuffed into a box and filed in a building no-one had access to, there wasn't any potential for anything great to happen," explained Mr Dash.

"With a focus on openness and data sharing... I have to agree with Anil Dash that one of the most interesting tech "start-ups" to watch this year is the federal government of the US. The tech projects they are already coming out with are compelling and well done," said Mr Masnick.

And cities throughout the United States are following suit.

Here in Silicon Valley, San Jose has just just approved what it calls some "sunshine" reforms to ease public access to some city records. The move however was seen by critics as too timid and not going far enough.

San Francisco launched DataSF.org in the hope, said mayor Gavin Newsom, it will "create a torrent of innovation similar to when the developer was given access to the platforms behind popular technologies and devices like Facebook and Apple's iPhone."

Mr Newsom gives as an example the use of data on recycling that was released by the Department of Environment and used by a third party to develop EcoFinder, an iPhone app that helps residents recycle based on their location.

And for Mr Dash and many others who have weighed in on this topic, the crucial factor
is allowing the public to take all this open and easily accessible information and use it in new and exciting ways.

"That is when innovation happens. You build a system for one thing and someone uses it for something different. In the technology world that is very common and these government efforts allow that to happen.

"With the closed system we had in the past, only what government staffers anticipated was what was created," explained Mr Dash.

As part of a project called Apps for Democracy, developers have set up a website to show people "interesting ways to mash up data for the betterment of all."

These include an app called StumbleSafely that uses crime data to help people get home safely after a night on the tiles and Carpool Mashup Matchmaker to help people find carpools.

Others agree that the focus on openness and data sharing is key to changing government and how citizens relate to it.

Tim O'Reilly, the internet guru and the man who popularised the phrase Web.20 puts it best.

"Rather than licencing government data to a few select "value added" providers, who then license the data downstream, the federal government (and many state and local governments) are beginning to provide an open platform that enables anyone with a good idea to build innovative services that connect government to citizens, give citizens visibility into the actions of government and even allow citizens to participate directly in policy-making.

"That's Government 2.0: technology helping build the kind of government the nation's founders intended: of, for and by the people."