What kind of image does the phrase "teenage hacker" conjure up? A spotty, unfit adolescent, with poor social skills, trying to break into the Pentagon's network from his bedroom? Well, on Saturday, I found out just how inaccurate that is.

I had to pop into central London to get a new passport - and then wait around to collect it. So I went on to a "popular social network" (I won't name it, don't worry) and asked for suggestions as to how I should use my time. Someone pointed out that at Google's offices, around the corner from the Passport Office, an event called "Young Rewired State" was taking place.

I dropped in - and was confronted with a remarkable sight. Around 70 teenagers had gathered for this weekend event which is the brainchild of Rewired State - an organisation thinking of clever ways to free up public data.

The young hackers - I know that word once had negative connotations, but it's how the organisers describe them - were male, female, from near and far, and from all kinds of backgrounds. One wore a "Future Millionaire" T-shirt, others appeared to have their headphones surgically attached to their ears. Some described themselves as hardcore coders, others as web designers, and quite a few already seemed to have part-time jobs in the software industry.

But what they had in common was that they all seemed well-adjusted, sociable and incredibly smart. They split into groups, with mentors from Google and Rewired State, and set about their creative mission to come up with something useful by the end of the weekend. I wandered among the different groups as they spread themselves across the third floor of the Googleplex, taking advantage of the free wi-fi - and food - laid on by the search company. 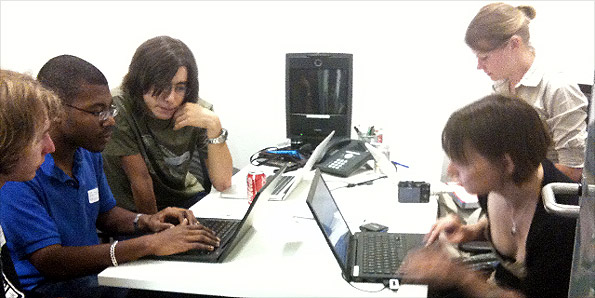 One group was seeking a way to scrape bus timetable information from the Transport For London website, another was trying to give learner drivers easier access to the DVLA's theory test questions, and in another corner an earnest gathering was looking at a flipchart with the heading "Mapping Prison Capacity", and talking about how you put together a Google heatmap.

At lunchtime, they mingled, discussed software, the rights and wrongs of file-sharing, how to get free access to Spotify's premium music streaming service - and how they'd found out about the event through a friend or some enthusiastic teacher. At one point, a girl rushed up to the group I was with and said "we got some data!" - the sheer enthusiasm about the task in hand was infectious.

Then on Sunday afternoon, they presented their ideas to a panel of government officials and web luminaries. Among the winners was that group trying to free up London bus data - TFHell won the "Most Likely to be Bought By Google" award. One of the judges, Ben Hammersley of Wired UK, said he "found the standard of the work produced by 15-18-year-olds in many cases infinitely superior to that produced by government professionals."

Now, you could put a negative spin on all this. On a lovely sunny weekend, dozens of teenagers spent all their waking hours indoors, staring at computer screens and "hacking" into government databases, while munching pizza. But that, like so much written about young people in Britain, is a parody. Meeting the Young Rewired State participants brightened up my weekend - and made me realise there's a generation now growing up determined to use their computing skills to make all of our lives better.