The spinning of Spinvox

It's a great British technology success story, using brilliant voice-recognition software to decode your voicemail messages and turn them into text. It's growing rapidly, and will have over 100 million users by the end of this year, to the delight of its backers, who include the investment bank Goldman Sachs.

It's created hundreds of high-quality jobs in the UK and elsewhere and employed some world-leading computer scientists at Cambridge University. That, at least, was how I saw Spinvox until recently.

But in the last few days, I've been given a somewhat different picture - by one current employee, and several others who've worked for the company in recent years. Most significantly, they've told me that the central claim of the company - that it's getting machines to translate audio into text - doesn't really stand up, because most of the work is actually done in call centres dotted around the world.

I have some confidence in those claims because I've seen compelling evidence that my own voicemails have been transcribed by humans, not by machines. I have been using the service for quite some time - indeed I've found it very useful - and been moderately impressed by the way that it translates the often garbled messages left on my phone.

But I have now seen the transcript of a number of my voicemails, including one from a major technology company promising a story, and another from the BBC's Occupational Health Department. What the logs of those messages appear to show is that the messages were sent to call-centres, where workers then spent a minute or so transcribing them. 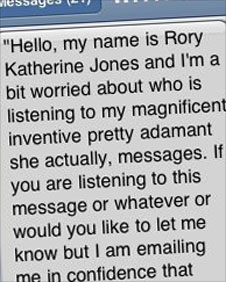 Still wishing to be convinced that it was people not machines listening to my messages, I tried another tactic. It was suggested to me that if I recorded a message and then sent it five times in a row to my mobile, then a computer would provide the same result every time.

Well, my message (which you can hear below) was deliberately stumbling and full of quite difficult words - including my rather tricky name. But every version that came back to me in text form was radically different - and pretty inaccurate.

So unless Spinvox is employing a whole lot of rather confused computers to listen and transcribe messages, it sounds like the job was being done by a variety of agents.

Why does this matter? After all, Spinvox has always been clear that there is a human element in the work - though when it says it can call on "human experts for assistance", you might imagine Cambridge boffins rather than overseas call centre staff. But the fact that so much of its work still appears to rely on people simply listening and typing could have implications for its finances and its data security.

The information commissioner has asked the firm to explain why its entry on the Data Protection Register says no data will be transferred outside the European Economic Area.

Customers may ask whether they really want people listening in to private or commercially sensitive messages. The company insists all messages are encrypted and anonymised to ensure agents cannot identify its sender or recipient.

But it's the sheer cost of getting hundreds of people to do this work which is the biggest issue for the company. One of its PR men admitted to me that the basis of the business was that more and more of the work should be done by machines, rather than humans.

So part of the spinning of Spinvox has been true, in that it has enjoyed extraordinary growth by providing a service that many people have found very useful.

But is it a major technology success story, cracking the age-old problem of getting a machine to understand the human voice in all its glorious, cacophonous varieties? Not yet, it isn't.