A few months ago, I wrote here about what I saw as an audio revolution on the web, with a new service called AudioBoo allowing internet users to share sounds and speech in the way the likes of YouTube help them to share video.

Now this revolution is gathering pace. As I've reported on this morning's Radio 4 Today programme, AudioBoo is attracting more and more content - celebrities like Stephen Fry are "booing", evangelists are using it for daily sermons, chefs and photographers are using it to broadcast daily tips, and citizen journalists have been sending audio reports from events like the G20 protests.

I particularly enjoyed this offering recorded by the Radio 4 newsreader Neil Sleat as he prepared for an afternoon bulletin. Having started as just an application for the iPhone, AudioBoo is now moving on to other phones, and has ambitious plans to expand further.

And there's now competition in the form of a rival service called ipadio. Unlike AudioBoo, you don't need wi-fi or even a 3G connection to use this way of sharing audio.

Ipadio's idea is to allow any phone user to broadcast live to the internet by simply making a call to the service. That means you only get phone quality audio - unlike the higher quality recordings you can make and upload using AudioBoo.

But Ipadio says it is "a live streaming phone reporting tool" whereas AudioBoo is a "record and publish" tool - and the company believes there is room for both.

Among those who've recorded "phlogs", as the company calls them are the Mayor of London Boris Johnson, the Paralympic champion Dame Tanni Grey-Thompson, and a doctor recording an audio diary of his walk across the Pyrenees to raise money for a kidney charity. 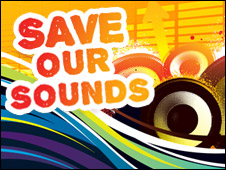 The BBC's World Service has started an interesting project using some of these new audio tools. It's called Save Our Sounds, and the aim is to gather sounds from around the world which might otherwise be lost.

We're asking listeners to the Today programme to take part in this exercise, by recording audio from around Britain and uploading it to the Save Our Sounds site. If you could use the tag #r4today, that would help us to identify recordings made by listeners to the programme.

So, forget video - the future is sounds, not pictures - and you can be part of it. Or at least that's what my radio colleagues tell me.