For the founders of the streaming music service Spotify - and for those in the music industry who'd like to see it prosper - these are nervous days. They have submitted their mobile application to Apple's app store, and its success or failure could determine the future of the company.

Spotify has been working on a mobile version of its service for some months, not just for the iPhone but for phones on the Google Android operating system.

I can now reveal - having played with a beta version for a few days - that the version submitted to Apple will allow users to take their existing playlists with them on the phone and to search over wi-fi or a 3G network for new tracks - but there's another "killer app" to this app. It allows you to download songs or entire playlists so that you can take them with you on the phone - and listen even when you don't have a signal or a wi-fi connection.

It's a very clean and simple interface, which launches quickly, showing your playlists - or at least as quickly as your network allows. The beta version was a bit buggy, with occasional crashes, and there's one major downside - the iPhone doesn't let you run multiple applications so you can't do anything else while listening to your music. And streaming over 3G worked pretty well for me, until I hit a network black spot near my home. But being able to download a playlist to your phone over your own network before you go out, then listen to it despite poor or non-existent network coverage is a real bonus.

Spotify has not yet said how it will market the application, but my bet is that it will only be available to subscribers of their premium service. Which is why it's so vital to their future, because at the moment only small numbers of users are choosing to upgrade from the free ad-supported service to the premium ad-free version with extra bells and whistles. 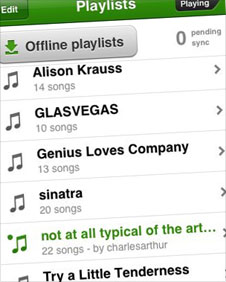 Talk to people in the music industry and they'll be hugely enthusiastic in public about Spotify, then tell you off the record that they have extreme doubts about its survival because a free ad-supported model just doesn't look likely to pay its way.

They will be keen to see this mobile application launched for two reasons - first it might be the key to getting users to pay a decent amount for a streaming service, and second, because it might help them chip away at the dominance of Apple in the digital music market.

Which is where it gets really interesting. Because who has to decide whether the Spotify iPhone application can be allowed into the app store? Apple, of course. And last week Spotify didn't seem convinced that it would get a warm reception, with one executive warning that its application might get blocked.

That would be an extraordinary move, laying Apple open to charges of anti-competitive behaviour, and already Spotify is rowing back from last week's warning. A senior source has told me the company is now confident that Apple will approve the application, as it has already allowed other music services such as last.fm and Pandora into the store.

Of course the iPhone is still a relatively small player in the global mobile phone market. Nokia, for instance, now makes far more MP3 players - in the form of music-enabled phones - than Apple, although very few of its customers use them to play music. So getting a Nokia Spotify app out will be a more important hurdle.

But convincing the music-savvy iPhone crowd that it's worth having, and probably paying for, the Spotify app on their phone would show the world that the music service was on its way to discovering a business model and a secure future. If the" app" flops, however, it's going to be back to the drawing-board.

Update, 10:45: Spotify has now confirmed that while the app itself will be free, it will only be available to its premium subscribers. The company says it should be on the app store in a few weeks - we then may get for the first time some fascinating data on how many people are actually willing to pay for Spotify. Oh, and by the way, those BBC apps on my phone are not apps - just links to web pages. Sorry to disappoint you...