Spinvox, we stand by our story

I was not intending to return to our story about Spinvox, and how its uses humans in call centres rather than computers to transcribe voicemails, unless there was a significant development. Then two things happened - first James Whatley, Spinvox's blogger-in-residence, otherwise known as Whatleydude wrote a lengthy post in which he described "a veritable maelstrom of accusations, misapprehensions and sometimes just plain lies", and promised to set the record straight. And then two new stories about Spinvox did come my way.

Whatleydude's post goes through five allegations - and dismisses each of them. I'm going to explain why we stand by our story.

JW: No. SpinVox uses humans to step in when the automated parts of our service need help. This is not brand new information.

RC-J: Well, this is the very heart of our story. We believe - and we have seen good evidence to support this - that humans in call centres not only play a large part in transcribing voicemails, they do far more than just "step in" to help.

Former agents in Egypt have described the work, as have South African call centre workers, and as you'll see later, one customer has seen at first hand how it works. So yes, "Spinvox uses humans to convert voicemails into text messages" is entirely accurate.

2) "There is a Facebook group sharing confidential information from actual Spinvox voice messages."

JW: No. But there is a Facebook group sharing training information from fictional Spinvox voice messages.

To elaborate on this further, the Egyptian call centre in question "which used to work for Spinvox" was trialling our software as part of our constant efforts to better our service.
Funnily enough, Raya, the QC (quality control) house in question failed to meet all of the stringent standards during training and we never commenced work with them. Surprising that this same QC house is now leaking "data"? I think not.

RC-J: Spinvox told me last week - and I put it in my piece - that Raya, the Egyptian call centre in question, had never gone live, and that the pictures on the Facebook group were from a training session.

Now I've found an interesting article in a telecoms industry magazine, published in the summer of 2008. It's an interview with Tarek Kamel, Egypt's minister of communications, which includes this passage:

"What sort of companies are coming to Egypt to use the developing infrastructure? Kamel names one intriguing arrival: SpinVox, the award-winning company that is winning business with a simple offer to turn voicemails on mobiles into text messages, so that people can read them during meetings without interrupting the flow of conversation.

"SpinVox came to us with a request for a pilot of 50 seats. Our kids are listening to voice messages and transcribing them to text messages. It's an excellent service for those customers who don't want to listen to voicemail.

"We set up the pilot, and it works very well. We are ramping up to 2,000 seats in the next 18 months. We've proved the concept -- they challenged us with the price and we passed the test."

So Egypt's communications minister had no doubt what the service was about. And what did the Spinvox PR man say when the journalist who did the interview asked him about the project? Not that it was a trial which had failed to work but simply: "We have no facilities in Egypt."

3) "All Spinvox messages are listened to by human agents"

JW: No. As per fact one, Spinvox only employs agents to step in when messages need analysis and the machine gets to decide. However, the agents in question will only ever hear/see the specific parts of the messages that need work on. They never see fully automated message conversions because we don't send them on once they're complete.

RC-J: We never said "all" but "the majority". But the idea that agents only hear "specific parts" of the message always seemed far-fetched. If a message like "hey Jimmy I'm taking my car to the (indecipherable), meet me there," comes in, how's the agent going to translate "garage" if he only has "indecipherable" without the words around it? 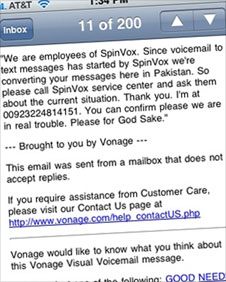 Now have a look at this picture, posted on the internet by a Spinvox customer, Jason Sewell from the United States. Actually, he's a Vonage customer and signed up to the VOIP operator's "visual voicemail" service, without knowing it had anything to do with Spinvox. Then he got via e-mail the message you can see. Jason takes up the story:

"You get the audio too with this service - and that was in fact my mother-in-law calling to see how the kids were. When I saw the number in the e-mail I thought it was a scam."

He feared calling the number would rack up huge charges - but in the end a friend made the call and reported back in a strongly-worded e-mail (which Jason has forwarded to me) on the man who answered:

"The guy says he works in a call centre in Pakistan that is contracted out by Spinvox and they're all pissed [off] since they haven't been paid in two months!!"

Just how does that square with the idea that they never see full messages - or the assertion later in Mr Whatley's blog that all messages are "completely anonymised"?

Jason Sewell certainly isn't happy. "If an employee of Spinvox would go as far as to do this, maybe it's not a stretch to think they could go further - using information in voicemails to commit identity theft, for instance."

4) "How many messages are referred - in any way - to human operators during the transcription process?"

JW: Well I'll be honest with you folks, I've been wrestling away with this one most of today. I wish I could tell you, really I could. But this information is so business critical to our operation that we simply cannot share it.

I'm not kidding when I say that it would be the equivalent of Coca-Cola publishing their exact recipe up on their own blog.

RC-J: So they're still not answering that question - nor are they refuting the main charge in my story.

5) "Spinvox has broken its entry on the UK Data Protection Register (saying that does not transfer anything outside the European Economic Area)."

JW: Okay, so this one isn't easy, legal stuff never is. But it is factually incorrect. Bear with me.

SpinVox's entry on the Data Protection Register says that we do not send any personal data outside of the UK as a DATA CONTROLLER. This much is entirely accurate.

Information related to the owner of the message is defined as "personal data" and this information does indeed stay with in the European Economic Area (EEA). This is information like such as telephone number, e-mail address and so on.

DATA PROCESSING however is not covered (and is not required to be covered) under our entry in the Register. Converting voice messages is classed as "processing data".

"BUT! What about ALL that personal data in each and every voicemail?!" I hear you cry. Yes. Well.

Any messages that need analysis for further conversion are COMPLETELY anonymised before being sent out of Spinvox data centres to QC houses whether in the UK or otherwise.

RC-J: Well, neither of us is an expert on data security legislation, but I've already demonstrated that personal data (phone numbers left in voice messages for instance) is leaving Europe, in apparent contravention of Spinvox's entry on the data protection register. And when I contacted the information commissioner's office to say that Spinvox says it's processing data, not storing it outside Europe, they stuck to their original statement about contacting the firm.

Mr Whatley goes on to say that some of the world's biggest telecoms firms have been over Spinvox with a fine-tooth comb and are completely happy. But you may notice that in its home territory, this apparently shining example of British technology has failed to sign up with any of the big network operators. One of them told me, "[w]e thought there were data protection issues, and we saw no business model."

And the financial side is one area Mr Whatley does not examine. Four different companies which have dealt with Spinvox have now told me that they are owed large sums of money and are taking, or considering taking, legal action.

And then there is the staff. They were all - including James Whately - invited to take their pay for July and August in the form of share options not cash. But, by Spinvox's own admission, 50% opted to stick to cash.

I'm sorry for writing such a long post. But Mr Whatley has spent some time rubbishing our story - and his blog post merited a detailed response.