Chrome - living in a Google world?

It's a few hours since Google used its company blog to announce its entry into the operating systems market, and already opinion is strongly divided. 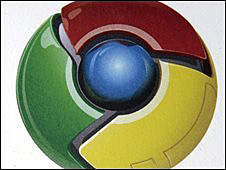 On the one side, there are commentators claiming that this is an earthquake in the software world - "Google Drops a Nuclear Bomb on Microsoft" read the headline on one technology blog.

On the other, the Linux community - if there is such a thing - was quick to dismiss the Chrome OS as a me-too product that might turn out to be vapourware.

When I asked for opinions on a well-known social network about the significance of Google's move, there was a sceptical response from some. One message read:

"I'd rather leave it to Linux. It's already there - and it's getting better all the time. This can only be a brain-drain".

"So GOS is...a browser and a stripped down Linux Kernel? Like every other netbook? Lots of sound and fury, signifying nothing".

You won't be surprised to hear that my totally impartial BBC view of this announcement falls somewhere between the two extremes of nuclear explosion and vapourware.

First, it's clear that the Chrome OS is still at a very early stage of development, and Google is making this announcement partly to encourage the open-source community to get involved, and partly to land a punch on Microsoft as it prepares for the launch of Windows 7.

But it seems to me that this is another quite significant event in the gradual migration of millions of ordinary computer users - people who wouldn't know a Linux kernel from a hole in the head - out of the Windows world.

If, like me, your first experience of computing was through a desktop machine in the office - or a classroom computer - then you are very likely to be living in that world.

You will have learned to use products like Microsoft Office, you will probably have started sending e-mails using Outlook - or maybe Hotmail - and you will have taken your first faltering steps onto the world wide web using Internet Explorer.

Yes, a defiant and growing minority of users have preferred to live in Macworld, but Microsoft and Windows have been synonymous with computing for most people.

But just in the last couple of years the scenery has begun to change. Google is probably the brand most familiar to the new generation of computer users.

Now they're discovering that, as well as searching with Google, they can use its software to send e-mails, to write documents and spreadsheets using Google Apps, to take a journey down their neighbour's street with Street View, or to browse the web using Chrome.

Then there's the fact that a mobile phone is becoming the way millions of people now get much of their access to the internet and, in some cases, their first introduction to computing.

In the mobile world, Windows is just one of a number of operating systems - including Google's Android - jostling for users' attention.

And soon those people who are spending more of their time in the company of Google rather than Microsoft will have the opportunity to use the Chrome OS for all their computing needs. If, that is, they don't want to edit video or play online games or do any of the more complex tasks that this new operating system may struggle to handle.

And, yes, you can already live in a Linux world if you are really determined and quite sophisticated in your computer use - but that is always likely to be a minority pursuit.

So Microsoft won't exactly be running up the white flag at Redmond after reading the Google blog. But there may be some furrowed brows in the marketing team as they try to work out how many people will now choose to wait for Chrome rather than upgrade to the latest version of the Windows world.