At an event in London last night, the writer, actor, and gadget fan Stephen Fry launched a surprisingly ferocious attack on the music and movie industries over the way they have acted to defend their copyright. 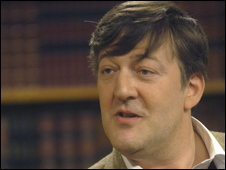 Even he seemed surprised, asking on Twitter as he left the stage: "Have I laid myself open to attack?" and: "Hope I'm not misunderstood. Such a pity if I get misrepresented as a 'help yourself and be a pirate' advocate."

After outlining the history of copyright, he went on to say that, in the entertainment industry's pursuit of the file-sharers, he suspects "that my business - the film business, the television business, the music business - is doing the wrong thing".

He described what he called the aggressive prosecution around the world of those who illegally download. It did no good, said Fry, to label these people as criminals.

He mocked "those preposterous" commercials on DVDs telling audiences "you wouldn't steal a handbag". He said he wanted to ask whether people in his industry are "so blind... as to think that someone who bit-torrents an episode of 24 is the same as someone who steals somebody's handbag".

There was more, much more.

Pirate Bay had been unjustly pursued, and the reputation of its founders had been smeared by the music industry. He himself had resorted to BitTorrent to get hold of a TV programme; mind you, it was an episode of House, featuring his old "partner in crime" Hugh Laurie, and he had already paid to download the series.

Sure, those who downloaded on an industrial scale for profit should be prosecuted - but if the price of downloads came down to a "fair" level, most people were pretty moral and would be happy to pay. He went on to compare the music industry to "big tobacco".

The event was the iTunes music festival - Fry was the warm-up act before a gig - and the young audience loved what they were hearing, with applause ringing out in the Roundhouse as he laid into the big corporations which profit from the current copyright arrangements. Corporations like Apple, the sponsors of the festival.

Stephen Fry is, of course, far too smart not to see the ironies inherent in a wealthy middle-aged celebrity coming over all rock 'n' roll and free love about the piracy issue - he conceded that many of his creature comforts had been acquired with the profits from products ring-fenced with copyright protection.

Someone in the audience pointed out that the tickets for the event told us that we were not allowed to use recording devices - an instruction ignored by just about everyone, with the encouragement of the man on stage. He admits that he isn't sure himself what he thinks about the protection of copyright, and has no easy answers.

So, how will the music and TV industries react to this attack? They may point out that some of what he said was inaccurate - the "Don't Steal a Handbag" adverts have been dropped, and the wave of prosecutions against individuals has subsided, replaced by a confrontation with ISPs.

At the Roundhouse, Stephen Fry was preaching to the converted, the generation that has got used to seeking out music and movies on the internet, and isn't entirely sure why you would pay to download. "Good to know there's a pro-free-download approving voice on the inside," was one Twitter comment after the event, though that wasn't precisely what he was saying.

But what would be interesting now is to hear Stephen Fry take his very entertaining act to a new audience - how about a gathering of the Featured Artists Coalition, the musicians fighting to defend copyright? Now that would be a good night out.

Update 1518: Well, maybe Stephen Fry will be taking his thoughts to the Featured Artists Coalition after all.

I've now been told that Billy Bragg, a member of the coalition (and guest on 5Live), has read this post, and says that he and his organisation are in complete agreement with Mr Fry: they too have no wish to see young file-sharers criminalised.

So perhaps a better night out would be a performance at the annual dinner of the BPI or another industry trade body.