Can O2 cope with smartphone traffic?

It's been announced today that O2 has won the exclusive contract to sell the new Palm Pre in Britain. 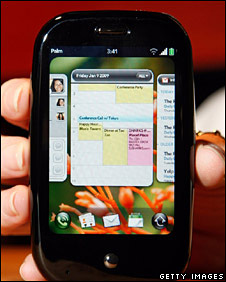 That means it will be the only UK network selling what many regard as the two smartest phones on the market right now, the Pre and Apple's iPhone.

So congratulations to O2 - but just a little question. Is your network really good enough to cope with the flood of data?

Because the whole point of both phones is that users will be doing far more than just talking and texting - they will be online all of the time making the most of their unlimited data packages built into the pricey contracts you will be selling them.

iPhone users have already shown a far greater appetite for data than owners of just about any other phone - surfing the web more, uploading far more pictures to Flickr, and of course using all those online apps they've installed on their phones.

And the advent of the iPhone 3Gs has only accelerated that trend, with Google reporting that uploads to YouTube from a mobile soared by 400% in the days after the launch of the first video-capable iPhone.

But if my experience is anything to go by, users of either of these phones may hit heavy traffic on the web as they try to surf, download and share information and pictures online.

O2 tells me that users on its 3G data network experience speeds "up to 3.6Mbps" and says it has begun rollout of "up to 7.2Mbps". The company says it has good coverage across most of the UK, with built-up areas obviously doing better.

I've been testing those claims using a handy little application called Speed Test - which does what it says on the tin. Over the past month I've done a series of tests on an iPhone, all of them in the London area, where you'd expect to get a pretty good signal.

I did once get a download speed of 1.7Mbps, but in most cases the speeds were below 1Mbps, and quite frequently, the 3G network just didn't appear to be there at all. 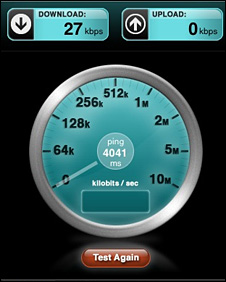 The picture on the right shows a test conducted by the window of my office in West London - as you can see, the phone is apparently downloading at just 27Kbps and uploading at....well, 0.

If I'd wanted to send some video to YouTube, I would have had a long and fruitless wait - and the phone's battery would have given out long before I'd uploaded.

Mobile reception in or near buildings can be problematic, but on my morning walk with the dog near my home, I've noticed that the 3G network evaporates altogether when I get to the park.

I called 02, and the company confirmed that there was a small hole in the network in the place I described. The firm said it really needed to upgrade a nearby phone mast - but was wary of the reaction from residents who'd protested before about 3G masts.

I do feel some sympathy for phone networks, besieged on the one hand by geeks like me demanding better service - and on the other by campaigners fearful that phone masts could in some way pose a danger to health. And O2 is no different from the other networks in making somewhat fanciful claims about the speeds that can be achieved by mobile broadband customers.

But if mobile networks are going to become one of the key routes to the internet for million of users, they're going to need to build more six-lane highways to replace those B-roads where the traffic keeps getting stuck.

Update, 10:43, 8 July: This morning Ofcom has published a report on the state of 3G coverage in the UK, and the growing importance of mobile broadband to consumers.

It includes maps of each network's 3G coverage [668KB PDF]. And it has to be said that O2's coverage looks pretty thin compared to other networks, with 3 in particular looking as though it reaches far more places across the UK.