Are Sacha Baron Cohen and Bono - two artists whose previous products were huge hits - now finding out how quickly a networked society can give the thumbs down to something it finds sub-standard?

A friend from the music industry drew the parallel between the two. Sacha Baron Cohen's latest satirical outrage Bruno - the travails of a gay Austrian fashion designer - followed on the surprise box-office smash that was Borat. U2's latest album No Line On The Horizon came five years after How To Dismantle An Atomic Bomb, one of the biggest-grossing albums of all time.

But while Bruno was the top grossing movie in the United States on its opening weekend, receipts fell away very sharply from $14.4m (£8.95m) on the Friday to $8.8m (£5.5m) on the Saturday.

In the old days, a cult movie would build its reputation over weeks, even months, by word of mouth. That, and a lot of smart marketing, is what helped Borat become a big hit in the States. 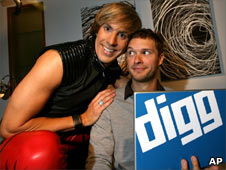 And this time around, the producers of Bruno could build on that last success, with a bigger marketing campaign and a series of stunts. But word of mouth now happens on social networks. So within minutes of emerging from the cinema, many of those who saw Bruno on the opening night were bad-mouthing it.

Here are a few examples I found in a Twitter search for July 11th, the day after the opening. "I liked Borat, but Bruno was just a retread." "my roomates saw Bruno last night. From what they said i doubt ill be going to see it." "Bruno was one of the stupidest movies I have ever seen.... What a waste of $30!" And, most damning of all, "BRUNO wasn't all that funny."

And with this movie right in the middle of the apparent Twitter demographic (many Facebook users would be too young for an adult-rated film), the comments appear to have had an effect - hence the abrupt fall in receipts on the Saturday, which would normally be a bigger night at the movies.

Now let's look at the UK sales figures for No Line On The Horizon compared with those for How To Dismantle An Atomic Bomb. The 2004 album sold around 200,000 copies in its first week, whereas in 2009, U2 sold a very respectable 158,000 CDs - though that was after weeks of an unprecedented publicity campaign. 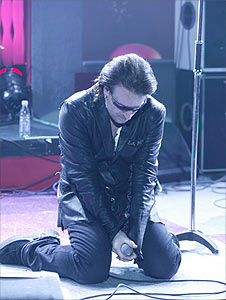 Now there are many possible explanations for that. The music market, as we all know, has changed radically in five years, and shifting any CD is harder. The album was leaked online before its release, and tens of thousands - perhaps hundreds of thousands - of potential customers got to hear it for nothing from the likes of the Pirate Bay.

Online retailers, like Amazon, were selling it very cheaply - for as little as £3 - and there is a theory in the music industry that lowering the price can actually damage sales by convincing people that you've got a cheap product not worth seeking out.

But here's another theory - that in a digital age where it was easy to sample the product legally, through services like Spotify, or through illegal file-sharing, word of mouth happened at the speed of light. And the verdict was that there were not enough decent songs on the horizon to make it worth shelling out for an entire album.