Last week, to the bemusement and slight irritation of my producer, I said on camera as I filmed a piece about smartphones on the Isle of Wight ferry that I was doing the story there "for reasons too complicated to explain."

Well, the reason was that my real purpose for heading to the Isle of Wight was that I was on a mission to meet the house that tweets and learn more about an "internet of things". Complicated enough?

The house in question is an idyllic 16th century thatched cottage, just a 10-minute walk from the beach on the south coast of the Isle of Wight. It belongs to Andy Stanford-Clarke, who revels in the wonderful title of "distinguished engineer and master inventor" at IBM.


He's also a man who brings his work home in the form of all sorts of projects to link his house to the outside world and monitor its activities, using the messaging software that is his key professional interest.

A while ago, he installed sensors on various objects around the house - the electricity meter, a bathroom window, some outside lights, even a mousetrap - and then channeled information from them via GPRS to a dashboard on his mobile phone, allowing him both to monitor energy usage, or even to change it by, say, switching off those outside lights. 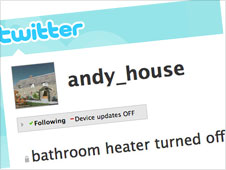 But now he has gone a whole stage further by signing the house up to Twitter. (Its account is andy_house, but you can only follow it if Andy lets you.)

The messages from those sensors now appear as "tweets". Here are a few recent ones:

So Andy can now follow exactly what his house is doing, in the same way as he might monitor the activities of Britney Spears, Ashton Kutcher, or any other of the millions of Twitterers - and who is to say whether it is any more or less interesting than them? At least he can be sure that it really is his house sending out the tweets, rather than a PR person.

But this Isle of Wight home isn't the only object communicating with the internet in this way:

• The Red Funnel ferry which brought me to the Isle of Wight also has a Twitter account(@Red_Ferries" 06:01 - Red Eagle is leaving Southampton")

• Tower Bridge lets the world know as it opens and closes (@towerbridge: "I am closing after the MV Dixie Queen has passed downstream") 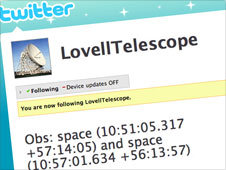 • And there is even a New York house plant with a Twitter account to communicate its needs(@pothos "URGENT! Water me!").

According to Andy Stanford-Clark, this is the beginning of what he calls "an internet of things". "It's a world where little devices, thousands, millions, trillions even, will be connected to the internet," he explained.

"They will each be telling us about one little piece of data that they know about and by mining that sea of data we can know more about the world that we're in."

As wireless technology becomes cheaper and better there is no reason why every item in a shop, every building, every vehicle should not be online - not necessarily through Twitter but on any other web service that comes along.

Andy says there are big implications for businesses - retailers for instance, keeping track of fresh food:

"Think of all those RFID tags - already 1.3 billion of them, enabling retailers to track where their goods are in the increasingly sophisticated and just-in-time supply chains. Some of these tags tell you if chilled food was warmed up in transit, so you can reject spoiled food before it reaches the shelves and the consumers."

But for all this to happen, he says three ingredients have to come together - instruments to measure what devices are doing, connections to the internet and other devices, and intelligence to make sense of the sea of data. It's what he calls the three "I"s: instrumented, interconnected, and intelligent.

Sir Tim Berners-Lee has spent many years talking about a machine-readable web, and it looks as though the machines - that is, computers - may well end up "reading" about the activities of other machines.

I sat musing on this at my kitchen table, wondering whether it might soon be instant messaging my sofa. Obviously not - but why, some time in the near future, should my lawn not be able to send out a Tweet asking the garden hose for some water?

I put that question to Andy Stanford-Clark, and he could see no reason why that would not work. Whether we want our machines talking to each other is of course quite a different matter.