In the last few days, the media here in Silicon Valley could be forgiven for losing it a bit over Steve Jobs and the news about his liver transplant. The way information has been stalked down, you might think we've been covering some ailing head of state or member of a royal family. 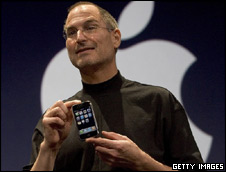 The thing is that here, to some degree, that is just what Steve Jobs is.

You see, there are very few colourful characters to flip out over in this part of the world. There isn't really that much in the way of bad behaviour. The megalomaniacs tend to operate on the down-low. And the gods of geek are very different from those of rock that most emulate or admire.

Think about it for a second.

Larry Page and Sergey Brin, the founders of Google, keep such a low profile they are almost invisible. Eric Schmidt, Google's CEO, is like everyone's favourite uncle with a wicked glint in his eye. Facebook's Mark Zuckerburg also plays the inconspicuous card, along with the founders of Twitter, who are settling into a different stage of their lives - one with wives and babies and dogs and cats.

Apple co-founder Steve Wozniak springs to mind as one who stands out from the crowd; despite his attempts to show the world that "geeks really can dance", though, he admits to being painfully shy.

So why the obsession with Steve Jobs, who shuns the limelight and does not court publicity in any shape or form?

A big part has to do with how he has transformed Apple and its products into some of the most talked-about in the world. And, of course, there is the whole issue of his health five years after his battle with pancreatic cancer and what it means to the future of this publicly-traded company.

Mr Jobs appears to be a complete enigma. He doesn't give interviews; he is described as a genius and a visionary; he doesn't want to talk about the past and he only wants to focus on the future.

While Mr Jobs jealously guards his privacy and controls the flow of information regarding his own life, he is a star performer when he gets on stage at those Apple events touting the latest software upgrade or iPhone release. He does not come across as some tortured soul who prefers the company of bits and bytes. He seems really comfortable in his skin.

Over the last year, the amount of information that the Apple chief exec has allowed to be made public about his health has been minuscule. In the last few days, it has been like a torrent.

Timing, of course, is all. The cynics note that news of Mr Jobs' liver transplant coincided with the release of the new iPhone 3GS on a Friday, giving analysts plenty of time to absorb it so that, come Monday, the markets would not overreact.

As some started speculating about whether Mr Jobs had used his wealth and influence to leapfrog others to a transplant, he and his handlers moved quickly to nip that in the bud.

In a highly unusual move, the hospital went on the record and issued a statement about why Mr Jobs was selected: "whoever is on the top of the list, they're there because they're the sickest".

Not only that, the doctor who runs the transplantation unit at Methodist University Hospital in Memphis then met with local reporters to talk more about it.

We all know that had to have happened with the express approval of Mr Jobs himself, a move that certainly has everyone wondering what he is up to, given his previous attempts to stymie all conversation about his health.

Does this mark a new beginning? A turning point? Either way, this game of cat and mouse is not set to stop any time soon.